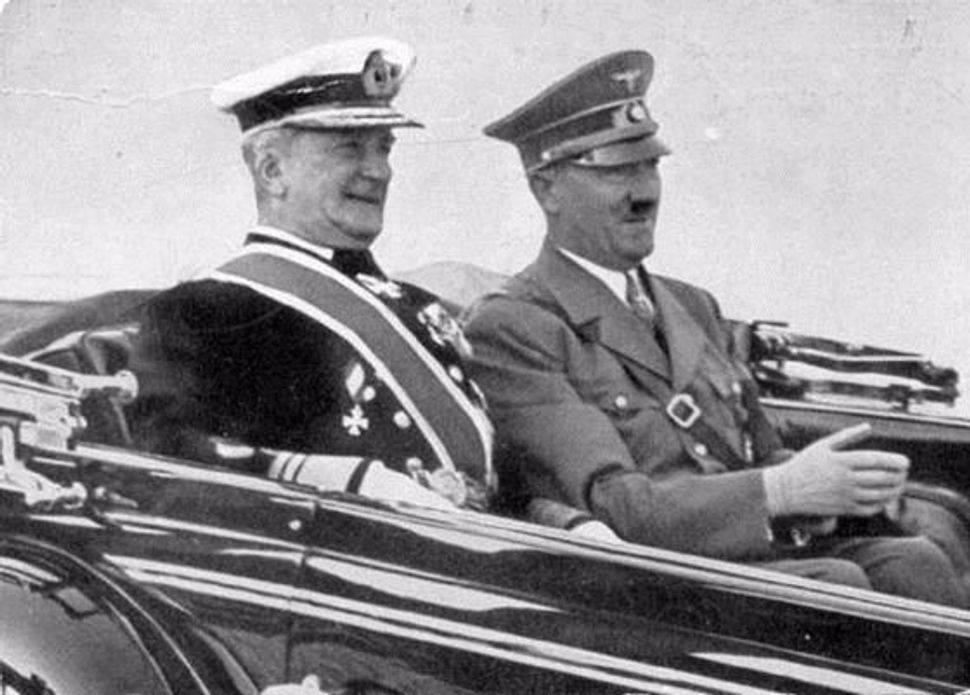 Miklos Horthy with Adolph Hitler in an undated photograph. Image by wikimedia

(JTA) — Churchgoers in Budapest said a senior lawmaker will attend a ceremony honoring the Nazi collaborator Miklos Horthy that they are organizing on International Holocaust Remembrance Day.

The KESZ group, a Christian organization, said this in an invitation for the Jan. 27 event at Budapest’s Main Parish Church of the Assumption, noting it will be attended by Sandor Lezsak, deputy speaker of the National Assembly, which is the Hungarian parliament, and a member of the Fidesz ruling party.

“In the Holy Mass, we remember with affection and respect for the late governor of Miklos Horthy (1868-1957), who was born 150 years ago,” read the invitation, according to a report Tuesday in Szombat, the Jewish Hungarian weekly. The editorialized article said the event was “provocative” though it is not yet clear whether it was planned to take place on Jan. 27 for the date’s symbolic significance.

Also scheduled to attend is Sandor Szakaly, who in 2014 the government of Prime Minister Viktor Orban was appointed to head the Veritas Historical Research Institute. Szakaly said in an interview that year that the 1941 deportation and subsequent murder of tens of thousands of Jews was an “action of the immigration authorities against illegal aliens.”