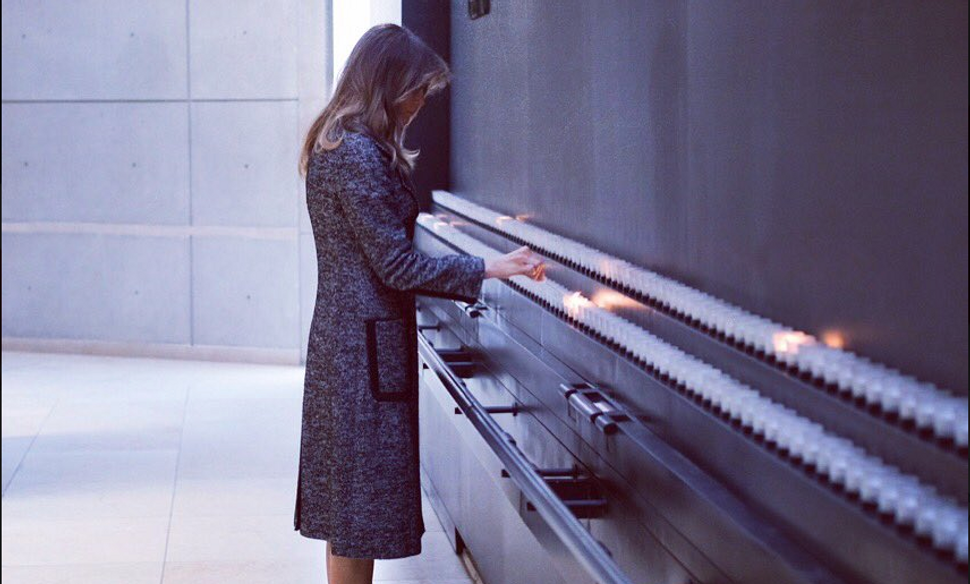 WASHINGTON (JTA) — Melania Trump toured the U.S. Holocaust Memorial Museum ahead of International Holocaust Remembrance Day, a year after husband President Trump stirred controversy by releasing a statement on the day that did not mention Jews.

“My thoughts and prayers are with the people whose lives and families were broken by the horrors of the Holocaust,” the First Lady said Thursday in a statement, two days before Jan. 27, set by the United Nations to commemorate the 1945 liberation of the Auschwitz death camp. “Yet it is also through our shared humanity that we come together now in commemoration, strength, and love.”

The statement from her office said the tour “recounted the rise of the Nazi Party in Germany from 1933 through 1939, the evolution of the party through the 1940s and its policies toward the Jewish people, and the liberation of Nazi concentration camps in 1945 by the Allied forces.”

The White House faced one of its first controversies last year when a statement marking the day omitted any mention of Jews. Trump administration officials then doubled down, saying that the statement’s aim was to honor all victims of the Holocaust, not just the Jews. A broad array of Jewish groups, including several that supported Trump, voiced outrage. Tens of millions of people died because of the war launched by the Nazis, but the Holocaust refers exclusively to the Nazi attempt to wipe out the Jews, murdering six million of them.

Mrs. Trump posted photos of her tour on Twitter and added the hashtag #AskWhy, launched this week by the museum to encourage Americans about the genesis of the Holocaust and its aftermath.