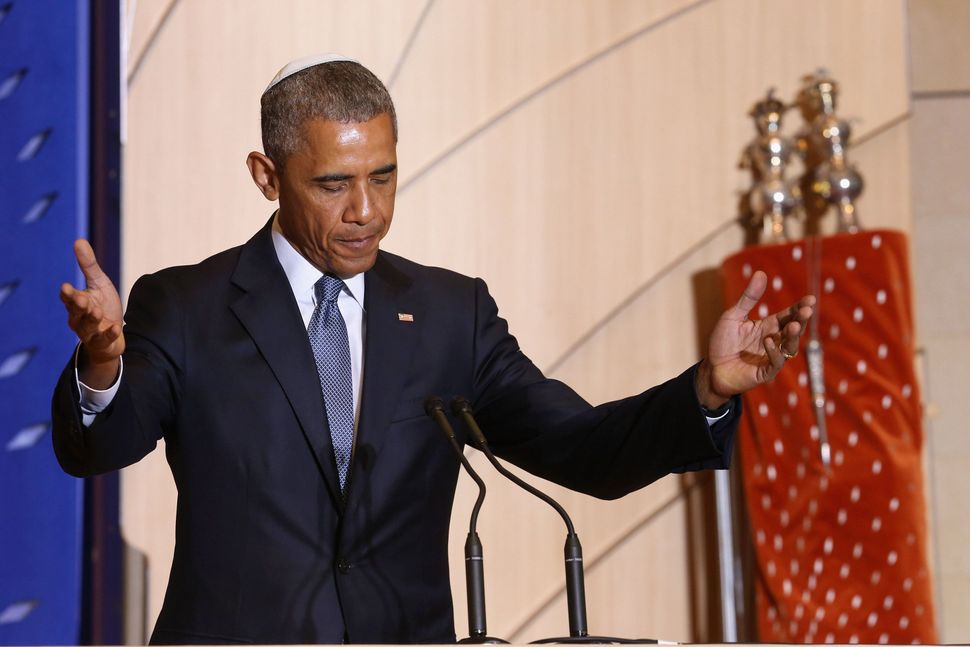 (JTA) — Barack Obama said his administration refrained from vetoing a 2016 United Nations Security Council resolution critical of Israeli settlements because the pace of their construction “skyrocketed.”

The former president spoke Wednesday during a rare public appearance at New York’s synagogue congregation of Temple Emanu-El, according to the British Daily Mail newspaper. He was referring to former U.S. Ambassador to the U.N. Samantha Power’s allowing Resolution 2334 on Dec. 23 to pass through the Security Council. It calls for an end to settlement construction while simultaneously declaring them illegal. Power abstained but did not exercise her veto to kill the resolution.

President Trump, who called on Obama to veto the resolution, was elected president in November that year.

Obama and his staff would often joke that he was “basically a liberal Jew,” he added while speaking to hundreds in attendance about what he said was his commitment to Israel’s security.

“The pace of settlement construction skyrocketed making it almost impossible to make any kind of Palestinian state,” the former president was quoted as saying in The Mail Online. “Voting against the resolution would have damaged our credibility on affirming human rights only when it’s convenient not when it has to do with ourselves and our friends,” Obama said.

To be “a true friend of Israel it is important to be honest about it, and the politics of this country sometimes do not allow for it,” Obama also said.

Describing Israel’s security as “not a subject for dispute,” Obama pointed to the September 2016 signing of a $38 billion aid package for Israel, the largest ever provided by any U.S. administration to any country.

Israeli Prime Minister Benjamin Netanyahu clashed with Obama frequently over settlements and the deal that the United States and five other world powers made with Iran in 2015 to relieve if from sanctions in exchange for a time-limited back scaling of some elements of Iran’s nuclear program. The Israeli prime minister also thanked Obama during their at times contentious relationship for Obama’s commitment to Israel’s security.

Netanyahu said at the time of the Security Council resolution that it was in “complete contradiction” to a U.S. commitment since 1980 to keep the U.N. Security Council from dictating to Israel the terms of a final status agreement.”The Obama administration carried out a disgraceful anti-Israeli underhanded move at the U.N.,” Netanyahu said.