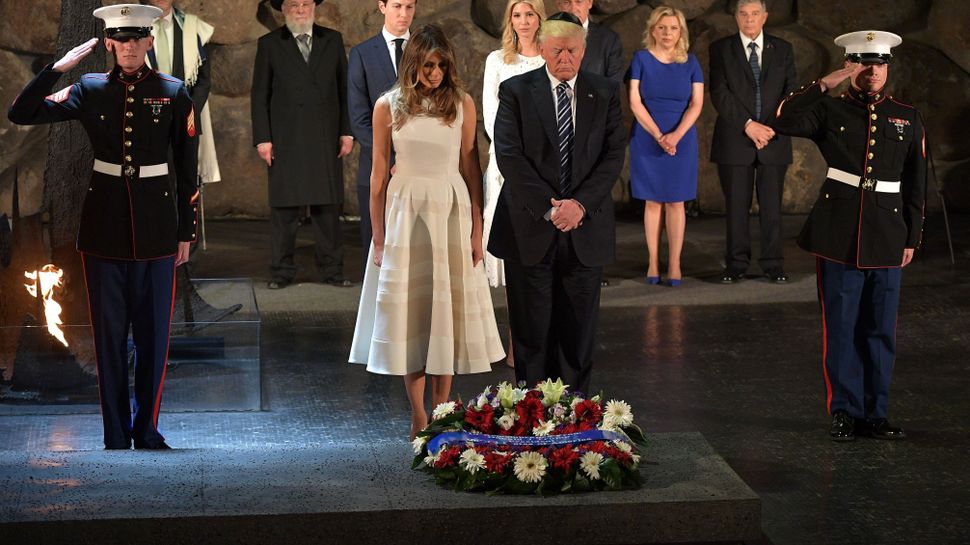 WASHINGTON (JTA) — In a message marking International Holocaust Remembrance Day, President Trump called the Holocaust the “systematic persecution and brutal murder of six million Jewish people” — a marked departure from last year, when his message omitted any reference to Jews.

“Tomorrow marks the 73rd anniversary of the liberation of Auschwitz-Birkenau, the Nazi death and concentration camp in Poland,” said the statement released Friday noting the anniversary set by the United Nations to commemorate the Holocaust.

“We take this opportunity to recall the Nazis’ systematic persecution and brutal murder of six million Jewish people,” it said.

Trump stirred controversy last year shortly after his inauguration by releasing a statement on the remembrance day that did not mention Jews. Administration officials said the statement’s aim was to honor all victims of the Holocaust, not just the Jews. An array of Jewish groups, including several that supported Trump, voiced outrage.

While the war launched by the Nazis claimed tens of millions of victims, historians use the term Holocaust to uniquely describe the effort by Nazis to eradicate the Jewish people.

The statement Friday nodded to the other victims of the Nazis, but separately from its mention of the Holocaust.

“In their death camps and under their inhuman rule, the Nazis also enslaved and killed millions of Slavs, Roma, gays, people with disabilities, priests and religious leaders, and others who courageously opposed their brutal regime,” it said.

Trump said the United States was “indebted” to Holocaust survivors.

“Although they are aging and their numbers are slowly dwindling,” he said, “their stories remain with us, giving us the strength to combat intolerance, including anti-Semitism and all other forms of bigotry and discrimination.”