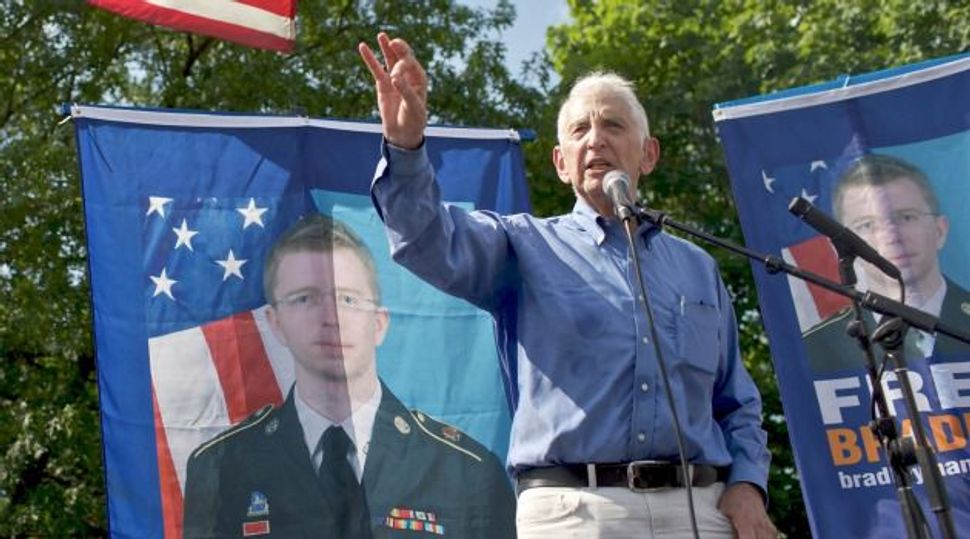 Privacy Please: Daniel Ellsberg, who leaked the infamous Pentagon Papers in the 1970s, speaks at a rally for accused WikiLeaks leaker Bradley Manning. Ellsberg has become an outspoken opponent of the government?s use of the Espionage Act to target those who reveal controversial programs. Image by getty images

The son of Pentagon Papers leaker Daniel Ellsberg recounted his memory of helping his father photocopy the famous documents when he was just 13 years old in an article published Monday in The New York Times.

Robert Ellsberg, now 62, told the Times that his father had asked him for help while they were out to lunch in 1969. “I don’t think he imagined there was much risk involved for me as a teenager,” Ellsberg told the Times.

Ellsberg said that they accidentally set of a burglar alarm at the advertising agency where they went to make the copies.

On another copying trip, this time with his younger sister along, their father asked her to cut the words “top secret” off of the top of one document.

Robert Ellsberg’s small role was excised from the recent film about the affair, “The Post.” Ellsberg, who converted to Catholicism after working with Dorothy Day at the Catholic Worker newspaper, is now editor of Orbis Books.