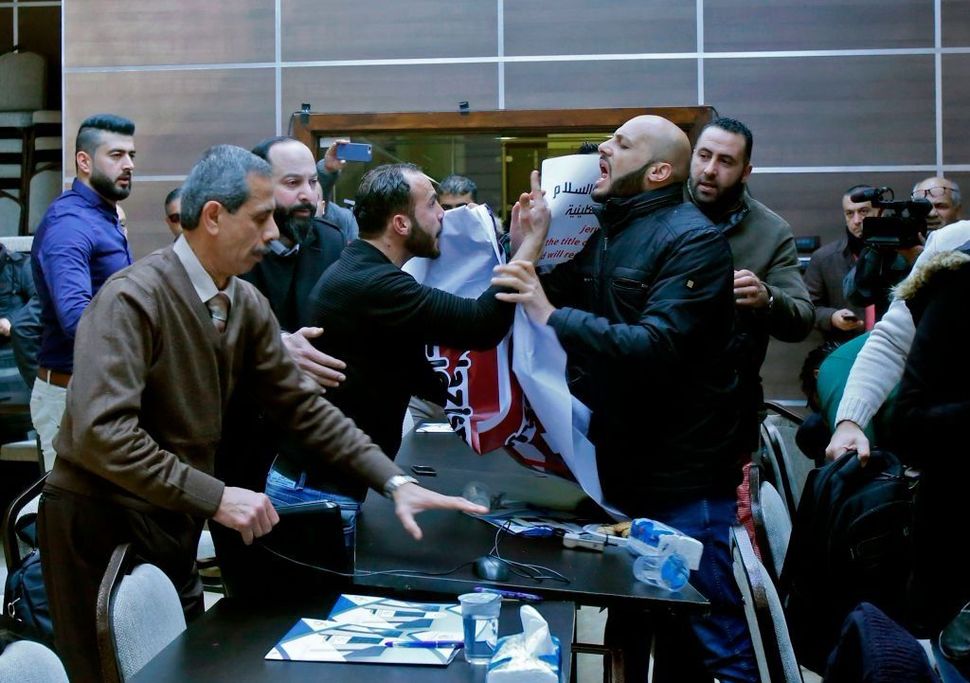 Palestinian activists disrupt a meeting between members of an American economic delegation and the Head of the Bethlehem Chamber for Commerce and Industry in the West Bank town of Bethlehem on January 30, 2018. Image by MUSA AL SHAER/AFP/Getty Images

Protesters threw tomatoes at the sports utility vehicle, which had U.S. consular license plates, kicked one of its doors and ripped the plastic casing off a side mirror as it drove off under Palestinian police escort from the Bethlehem Chamber of Commerce.

Samir Hazboun, the chamber’s director, told Reuters that a digital marketing workshop was under way when about five protesters barged in.

“We hosted an American expert on this issue. Some people who have been trying to express their point of view and protest (against) the American decision regarding Jerusalem and the political situation … interrupted the workshop and we stopped the workshop,” Hazboun said.

The U.S. Consulate in Jerusalem, which helped organize the workshop, declined immediate comment.

The U.S.-based lecturer was not a consular staff member. He was accompanied by consular security personnel and some of its Palestinian employees, organizers said.

Trump’s Dec. 6 announcement recognizing Jerusalem as Israel’s capital overturned decades of U.S. policy that its status should be decided in Israeli-Palestinian negotiations.

On a visit to Israel last week, U.S. Vice President Mike Pence said that Trump’s promised relocation of the U.S. Embassy from Tel Aviv to Jerusalem would take place by the end of 2019. Palestinians boycotted Pence’s visit.

In the Aida refugee camp near Bethlehem on Saturday, effigies of Trump and Pence were hanged and burned in a protest attended by about 30 Palestinians.