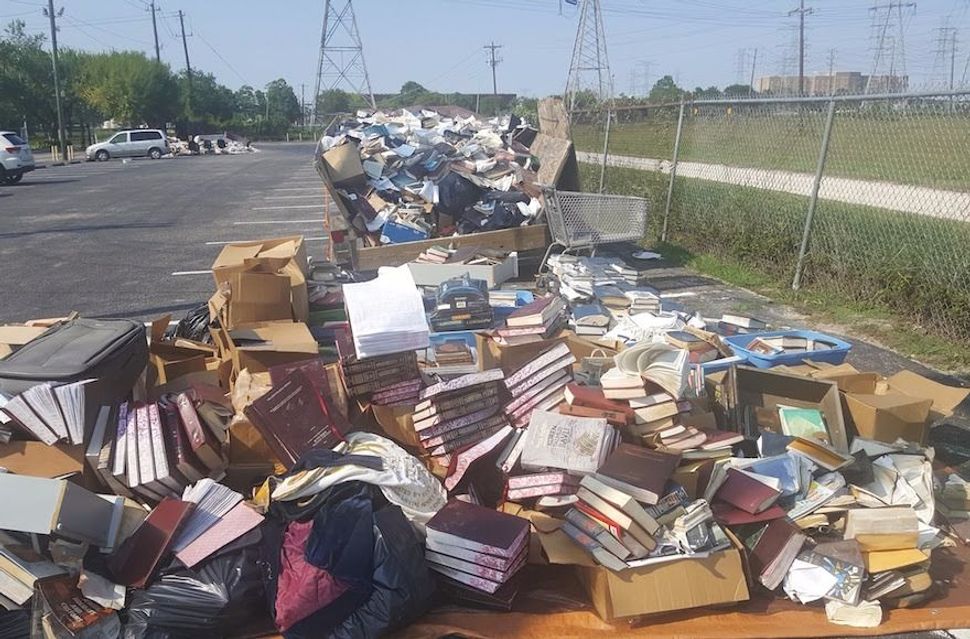 Water-logged books outside the United Orthodox Synagogues in Houston, Texas, after Hurricane Harvey. Image by jta

The United Orthodox Synagogues building in Houston, Texas, has been flooded three times in as many years. But Hurricane Harvey, which filled the space with seven feet of water in early September 2017, proved to be the final blow. The synagogue, in use since 1961, is set to be demolished, the Houston Chronicle reported.

On Sunday, congregants will pray in the space for the last time. No date has been scheduled for demolition; clergy and lay leaders are working to preserve historical and religious artifacts as they assemble a plan for a new home for their community.

“Buildings can be fixed, torn down or rebuilt,” said Amy Goldstein, a UOS congregant whose own home took on 13 feet of water during Harvey. “But this is our community and our congregation. When you share a sacred place, it’s hard to let it go.”

The synagogue is said to be considering both building a new synagogue in the same location or moving it to somewhere less prone to floods. Several of Houston’s Jewish communal centers, heavily concentrated in the southwestern Meyerland area, took on heavy flooding. One out of every 13 Jewish families sustained flooding in their homes — about 2,000 families total.

Along with UOS, two other major synagogues in Meyerland were damaged, affecting a total membership of 3,900 congregants.