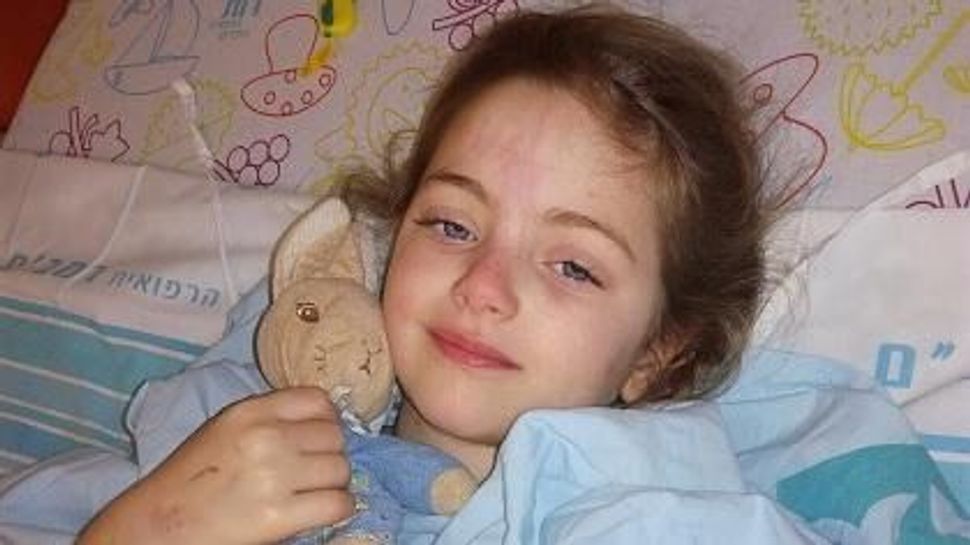 A smiling Kyra after her operation at the Rambam Hospital in Israel. Image by Kyra Warrell

(JTA) — A 6-year-old British girl has undergone special surgery in Israel that will allow her to keep her leg and her doctor called it a success.

Kyra Warrell, of Brighton, located on the south coast of England, is afflicted with proximal focal femoral deficiency, which will leave her left leg about 8 inches shorter than her right if left untreated. The surgery took place on Sunday at Rambam Hospital in Haifa, the Jewish Chronicle reported.

Dr. Dror Paley, an Israeli-born physician who is internationally recognized for his expertise in limb lengthening and reconstruction, told the London-based Jewish Chronicle that Kyra will be ready for a more difficult leg-lengthening surgery next year.

The family must now raise $132,000 for the second operation, which will take place in Florida, where Paley is the director of the Paley Institute in West Palm Beach, and require them to remain for three months for daily physiotherapy near the hospital to ensure the best chance of success. The family has said they will sell their house to cover the costs, if necessary.

Doctors at Britain’s National Health Service had decided that an above-the-knee amputation, to allow for a prosthetic limb, would be the best option. But Kyra’s parents, Rima and Neil Warrell, wanted their daughter, who loves dancing and gymnastics, to be able to keep her leg.

The Warrells, who are not Jewish, started a crowdfunding campaign to bring Kyra to Israel for the first of three surgeries between now and the time she is 16 to save her leg. They raised about $71,500 of the approximately $78,500 needed for the surgery.

The family told the Jewish Chronicle that there was an outpouring of offers of help from Israelis, including help with translation, meals, places to stay and visits to the hospital. A Haifa resident stocked the refrigerator of the apartment where the family is staying for 10 days and others took them out for meals.