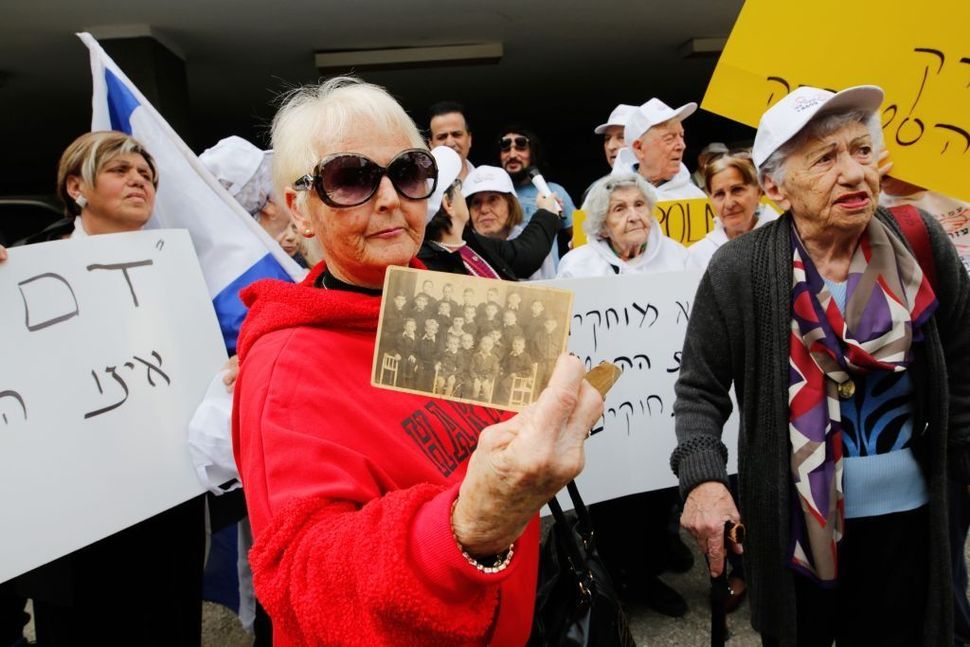 Holocaust survivor Malkah Gorka holds a picture from her school days in Poland during a protest in front of Polish embassy in Tel Aviv on February 8, 2018, against a controversial bill passed by the eastern European country’s senate. The legislation sets fines or a maximum three-year jail term for anyone describing Nazi German death camps in Poland, like Auschwitz-Birkenau, as Polish. Image by GIL COHEN-MAGEN/AFP/Getty Images

JERUSALEM (JTA) — Dozens of Israeli Holocaust survivors demonstrated outside the Polish Embassy in Tel Aviv to protest a new law in Poland that outlaws blaming the country for Nazi crimes.

On Thursday, the survivors entered the embassy compound and surrounded a diplomat’s vehicle waving signs and shouting slogans.

They carried signs in Hebrew and Polish saying “No law will erase history,” “The Polish law spits in the Israeli people’s face” and “I still have nightmares because of what the Poles did,” Ynet reported. The demonstrators also shouted “Nobody will forget what you did.”

Several of the survivors, who were accompanied by younger Israelis, stood in front of the embassy and told their personal stories of suffering caused by the Poles during the Holocaust, according to reports.

Polish President Andrzej Duda signed the controversial legislation on Tuesday after both houses of parliament passed the measure. He also announced that he would send the law to Poland’s Constitutional Tribunal for review. Ukraine, Lithuania and Latvia have passed similar laws since 2010.

Critics of the law include Israeli leaders, the Yad Vashem Holocaust memorial in Jerusalem, the U.S. State Department and Jewish groups.