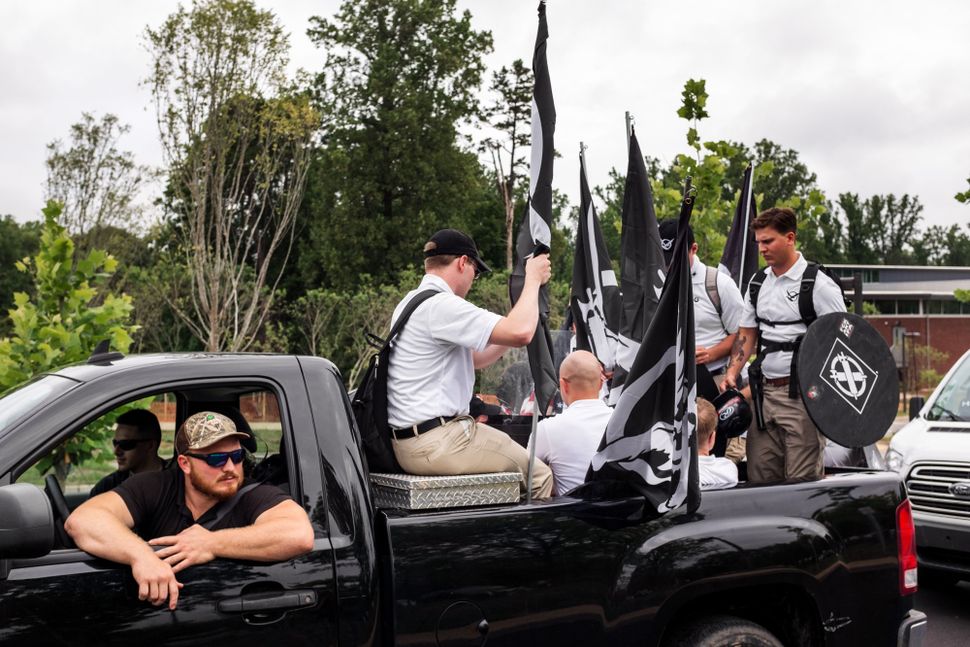 Members of American Vanguard waiting to disembark for the Unite the Right rally in Charlottesville on August 12, 2017. Image by Getty

Members of the white supremacist group American Vanguard pasted their own posters over flyers advertising events for Black History Month at the University of Tennessee-Chattanooga, the Chattanooga Times Free Press reported last week.

The posters showed American Vanguard’s logo and website under an image of Hitler and the words “Hitler Was Right!” The university removed the posters.

“The University supports free speech but not by trampling on the rights of others. More importantly, the expression of such racist, hateful views [has] no place on our campus,” university chancellor Steve Angle said in a statement.

However, another member of the university’s administration said that the posters would have been allowed if American Vanguard had followed proper procedures for putting posters up around campus instead of pasting them on top of pre-existing posters.

HU Staff: Kecia Gayle @kecia.kae No place for hate: The University of Tennessee’s president said vandals at the Chattanooga campus have tried to display racism by covering up posters for black history month with ones referencing Adolf Hitler.________________________________ pic.twitter.com/uRAbzlJlEy


The Southern Poverty Law Center reported shortly after the Charlottesville march that the man who allegedly killed counter-protester Heather Heyer by driving his car into a crowd of people at the rally is allied with American Vanguard.