Va. Republicans Call For Ouster Of Official Who Said Only Christians Should Run 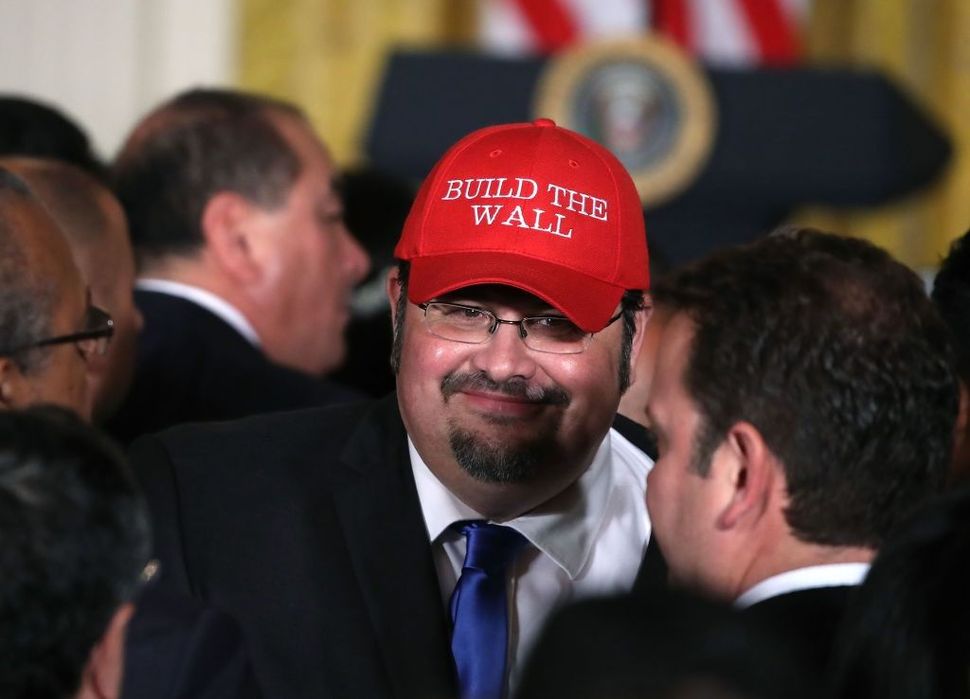 Fredy Burgos of Virginia wears a hat with the words ‘Build The Wall’ during an event to celebrate Hispanic Heritage Month in the East Room at the White House. Image by Mark Wilson/Getty Images

WASHINGTON (JTA) — Virginia Republicans have called for the ouster of a party official who said only Christians should run for party positions.

“Having a preference for Christians over non-Christians as political leaders is not bigoted,” Fredy Burgos said this week in a Facebook post promoting his favored candidate, Tim Hannigan, for the chairmanship of the Fairfax County Republican Committee against a Jewish rival, Mike Ginsberg. “It is a preference and a duty we are allowed.”

Hanning and Ginsberg are running to chair the committee in Fairfax County, comprising suburbs of Washington, D.C.

Burgos, an elected member of the county party committee, removed the post after it was attacked on the conservative Virginia blog Bearing Drift. He subsequently posted about his “affection” for Jews.

But top Republicans in the state called for his removal, noting his history of making controversial comments. During the presidential campaign, Burgos, a backer of Donald Trump, made anti-Muslim and anti-immigrant comments on social media. He removed them following requests by party officials.

Among those calling for Burgos’ removal were the area congresswoman, Rep. Barbara Comstock, R-Va. and John Whitbeck, the state party chairman, as well as an array of Fairfax County GOP leaders. Hannigan removed Burgos as an adviser but stopped short of calling for his removal as a party official. Bearing Drift compiled the Republican calls for his removal.

The Jewish Community Relations Council thanked Whitbeck and Matt Ames, the chairman of the Fairfax GOP committee, for calling for the ouster of Burgos and their “speedy and unequivocal denouncement of Fredy Burgos’ anti-Semitic message.” Burgos was invited to the White House in October for Hispanic Heritage Month. According to a pool report, he wore a red baseball cap with the slogan “Build the Wall,” a reference to Trump’s campaign pledge to build a barrier between Mexico and the United States.

Va. Republicans Call For Ouster Of Official Who Said Only Christians Should Run