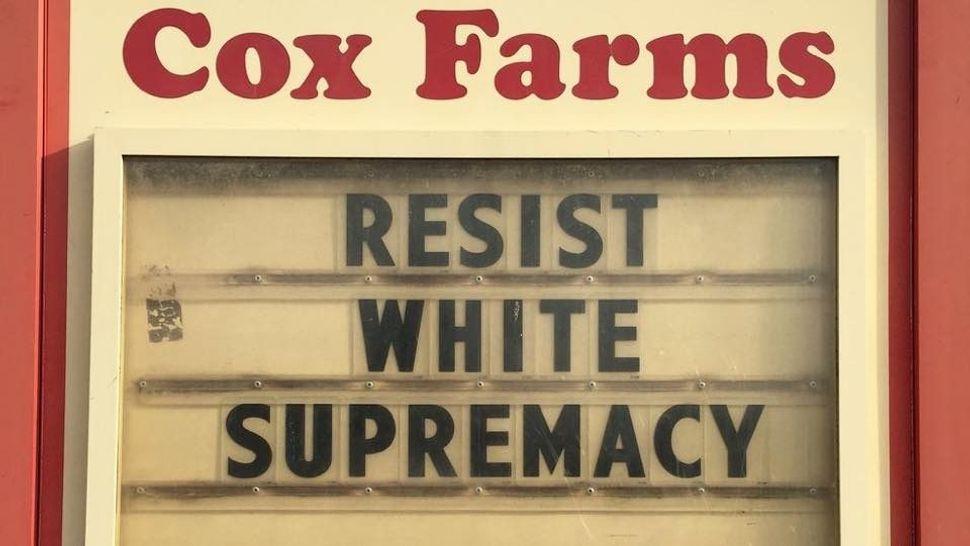 A sign on a farm in Centreville, Virginia. Image by Facebook/KFDM News

A farm well-known in northern Virginia for wearing its politics on its sleeves decided it was time to tone it down. A sign reading “Rise & Resist” had led to an outpouring of vitriol from neighbors and fellow Virginians over a perceived attack on Trump. They thought changing it to “Resist White Supremacy” would make it a message more people could get behind.

Cox Farms, run by Aaron Cox-Loew, became the focus of a major war on social media last month. Her post about the sign on Facebook was shared 15,000 times.

“We see it as our moral responsibility to use our position of privilege and power, along with the tools of our trade and the platforms available to us, to engage visibly and actively in the fight for justice,” Cox-Loew wrote. “Our roadside sign messages are one small way we do this.”

But detractors on social media accused the “Resist White Supremacy” sign of excluding others. They charged that Cox Farms didn’t support the police because they refused to put up a “Blue Lives Matter” sign. Cox-Loew took time to respond to comments of all stripes — even pushing back against people who praised the sign as “brave.”

“We are white people using our privilege and power to say something that should be obvious but clearly still needs to be said,” she wrote, “and there’s nothing brave about that.”