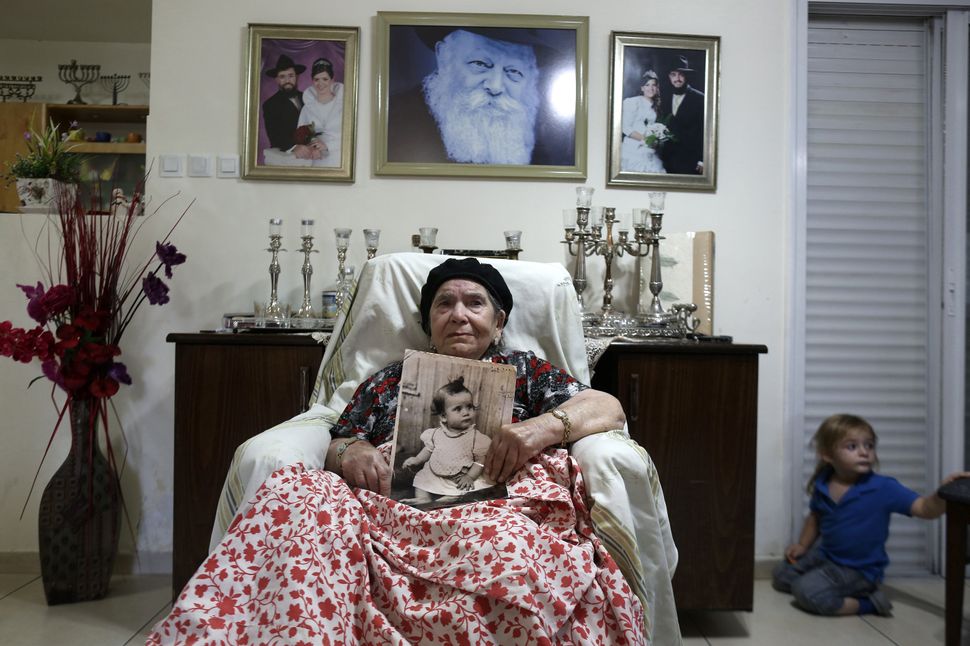 Frecha Amar, 84, from a Moroccan descent, poses with a picture of her baby, who she says was abducted in 1958, on June 29, 2016 at her home in Kfar Chabad, near Tel-Aviv. Amar is one of the thousands of Israelis, mainly from Jewish Yemenite families, who claim their babies were abducted more than 60 years ago and handed to adoption.

JERUSALEM (JTA) — A new law allows families of Yemenite children who disappeared between the years 1948 and 1970 to obtain a court-ordered exhumation of their graves for genetic testing.

Since the 1950s, more than 1,000 Israeli families have alleged their children were systematically kidnapped from Israeli hospitals and given to Ashkenazi families for adoption in the country and abroad. The claims of the families, mostly immigrants from Yemen, were generally dismissed by authorities.

The law passed the Knesset plenum unanimously in its second and third reading on Monday. It will remain in effect for two years. Once an exhumation is approved, the state will cover the costs. Funds have been made available to open at least 300 graves. In many cases, the family does not know where their child’s grave is located, or the grave that has been identified has several bodies buried in it.

The law was proposed by Likud Party lawmaker Nurit Koren, the daughter of Yemenite immigrants whose cousin was among the children who disappeared.

Three government-appointed committees have looked into the Yemenite children affair, and each concluded that the majority of the children died in the hospital and were buried without the families being informed. Scholars have reached similar conclusions.

The law comes more than a year after Israel posted an online database of some 200,000 pages of declassified documents about the long-controversial Yemenite children affair.