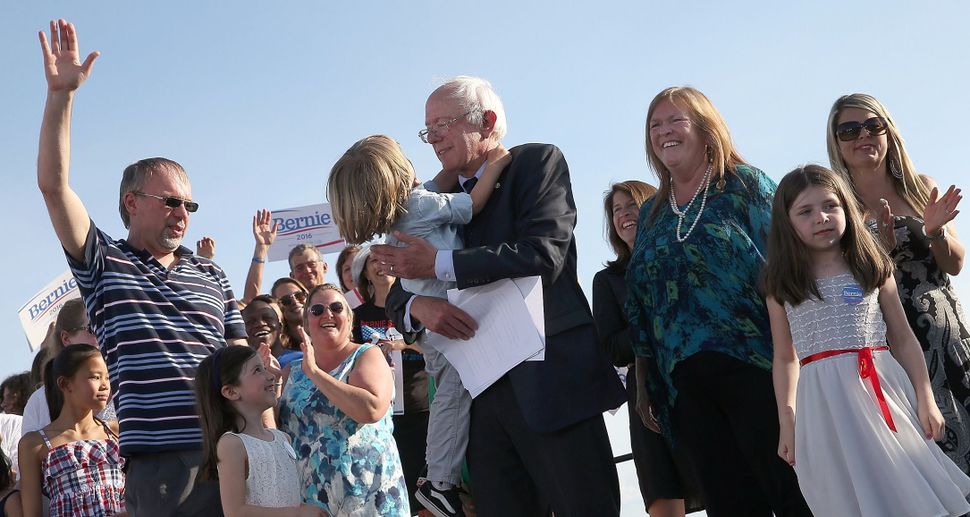 Family Moment: Levi Sanders (far left) shares the stage with other members of his family in Burlington, Vermont, after Bernie Sanders (center) announces his run for the presidency. Image by Getty Images

(JTA) — Levi Sanders, the only son of Sen. Bernie Sanders, said he is considering a run for Congress in New Hampshire.

“Oh absolutely, I’m definitely considering it,” the younger Sanders told Vice News of his envisaged bid for the open seat in the 1st District, which is expected to be one of the most contested in the country this year. “I’m excited, motivated, and interested in the race.”

Levi Sanders, 48, told Vice in an interview published Friday that he would run on a similar platform of Medicare for all and free college tuition that animated his father’s presidential run in 2016, when the the elder Sanders beat Hillary Clinton in the New Hampshire Democratic primary, 60.4 to 38 percent. Bernie Sanders, an Independent from Vermont, caucuses with Senate Democrats.

“The basic difference is that I’m a vegetarian and he’s not,” Levi said of his father, adding that despite their policy similarities, he would run his own campaign. Sanders said he has talked to his father about the race but declined to elaborate.

Sanders has been around for every race his father has ever run and served as a senior policy strategist for the presidential campaign, according to Vice. He also works as an advocate for people trying to obtain Social Security benefits. Eight years ago, Sanders lost in a bid for City Council in Claremont, New Hampshire.

In the 1st District race, seven Democrats are already running and raising money to succeed Rep. Carol Shea-Porter, a Democrat, who is retiring. Her seat is one of the Republican Party’s top targets in 2018 as the district regularly swings from blue to red, Vice wrote. President Donald Trump received more votes than Hillary Clinton in the district in 2016.