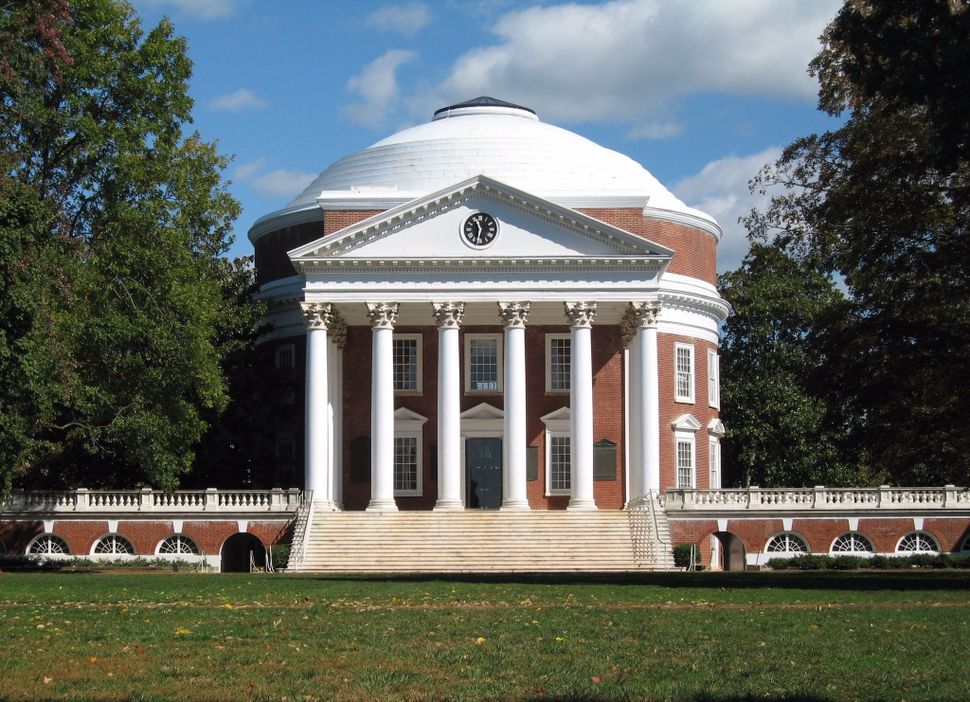 The Rotunda at the University of Virginia. Image by Wikimedia

(JTA) — An event featuring Israel Defense Forces reservists at the University of Virginia was disrupted by pro-Palestinian protesters who chanted anti-Israel slogans and handed out literature.

University Police Department officers also showed up at the event on Thursday night after noting the gathering of protesters. An assault report also reportedly was received by campus police, the student newspaper Cavalier Daily reported.

The idea behind the “Building Bridges” event, which invited the reservists to share their personal stories and answer questions, was “to humanize the conflict, learn about Israeli society, and allow for honest conversation,” The Brody Jewish Center – Hillel at UVa said in a statement that also was posted on Facebook. The event also was sponsored by CavPac and Hoos for Israel.

During the program the protesters, both students and non-students, entered the hall and began disrupting the event, according to the statement. The protesters were invited to remain and join the conversation, but declined.

“While free speech and the ability to protest are important aspects of college life, we are disappointed that protesters refused to engage in conversation and instead continued to shout intimidating and hostile slurs directed at students, staff, and panelists. UVa is and has always been a place for the free exchange of ideas, learning from opposing views, and open dialogue,” the statement said.

Student Ben Borenstein told the Cavalier Daily that he felt “threatened” during the protest. “It was probably the most afraid that I’ve been in a situation at U.Va. because it was such a small classroom and it was so loud … it was very antagonistic and almost militant,” he said.

In a university-wide email, Dean of Students Allen Groves said that the protestors may have violated several university policies, including those on protests and amplified sounds.