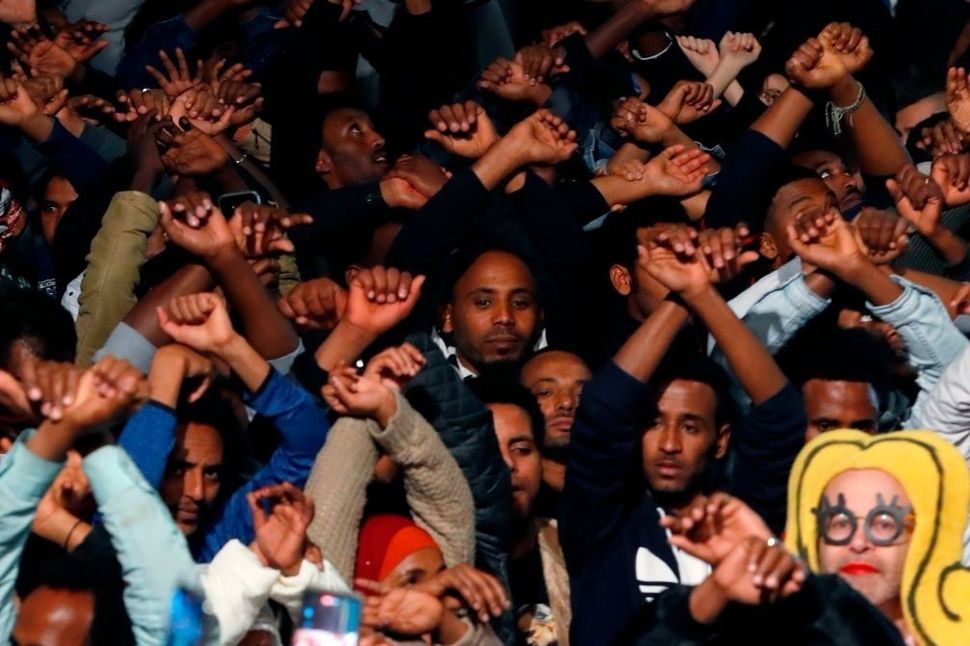 JERUSALEM (JTA) — Up to 20,000 demonstrators protested in Tel Aviv against the deportation of African asylum seekers.

The protest on Saturday night took place in south Tel Aviv, near neighborhoods highly populated with the African migrants, mostly from Sudan and Eritrea. Many of the Israeli residents of the neighborhood object to their living there.

Protesters, including local residents both African and Israeli and many who came on buses from other areas of the country, carried signs reading “No to deportation,” “We’re all humans” and “Refugees and residents refuse to be enemies.”

The demonstration was organized by the group Residents of South Tel Aviv Against Deportation.

Togod Omer Adam, an asylum seeker from Sudan, told protesters: “We did not choose to come here to south Tel Aviv. When people arrive at the border they give you a one-way ticket to the central bus station in Tel Aviv.”

Hundreds of African asylum seekers in the Holot Detention Center in southern Israel went on an open-ended hunger strike after the first asylum seekers were jailed for refusing to be deported to a third country, said to be either Rwanda or Uganda.

For now, deportation notices will not be issued to women, children, families, anyone recognized as a victim of slavery or human trafficking, and those who had requested asylum by the end of 2017 but have not received a response, Haaretz reported.

As many as 40,000 Eritreans and Sudanese are living in Israel, including 5,000 children.