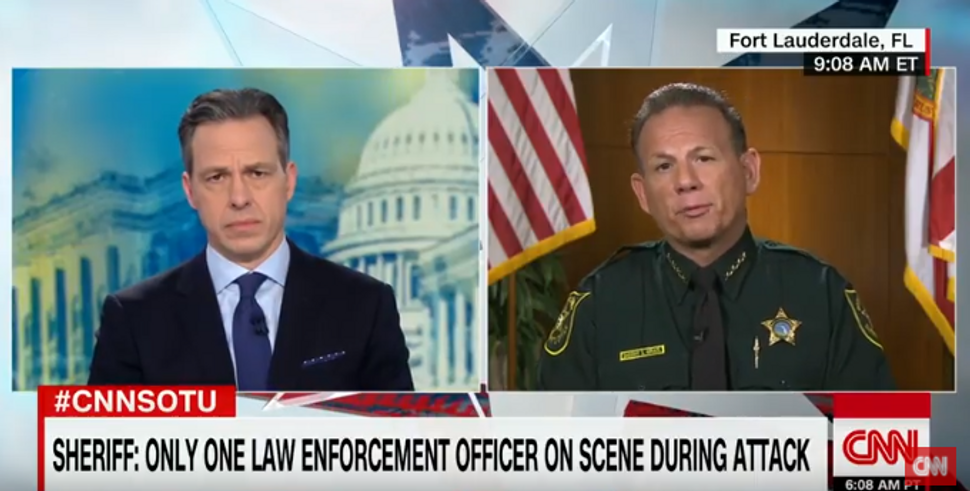 In an interview stretching nearly half an hour, CNN’s Jake Tapper grilled Broward County Sheriff Scott Israel over his department’s response to the recent school shooting in Parkland, Florida, which left 17 dead.

Tapper started by asking Israel about reports that his department’s designated school resource officer, Scot Peterson, did not enter the building during the shooting. Israel replied that his evidence corroborated that claim.

“When I saw that, I was disgusted,” Israel said. He pointed out that he suspended Peterson and was proceeding with termination before Peterson resigned.

CNN reported Saturday that deputies from Coral Springs had arrived at the school to find that three other Broward County officers had not entered the building. Israel replied that those actions are also under investigation.

Tapper pointed out that the Broward County Sheriff’s Office had received 18 calls about alleged school shooter Nikolas Cruz between 2008 and 2017, including a threat to shoot up a school. Tapper described them as “missed red flags,” but maintained that “of those 18 calls…16 of them, we believe, were handled exactly the way they should. Two of them, we’re not sure if our deputies did everything they could have or should have….We will absolutely find out what we did or what we didn’t do.”

Israel defended what he called his “amazing leadership” of the sheriff’s office, which Tapper questioned.

“Maybe you measure somebody’s leadership by whether or not they protect the community. You have listed 23 incidents before the shooting involving the shooter, and still nothing was done to keep guns out of his hands, to make sure that the school was protected, to make sure you were keeping an eye on him….Your deputy at the school failed. I don’t understand how you can sit there and claim amazing leadership.”

“Jake, on 16 of those cases, our deputies did everything right,” Israel replied.

After pushing Israel to answer whether he will resign, as a Republican state legislator is demanding, Tapper asked one final question: “Do you think that if the Broward Sheriff’s Office had done things differently, this shooting might not have happened?”

“Listen, if ifs and buts were candy and nuts, O.J. Simpson would still be in the record books,” Israel responded.

“I don’t know what that means,” Tapper replied. “There’s 17 dead people, and there’s a whole long list of things your department could have been done differently.”