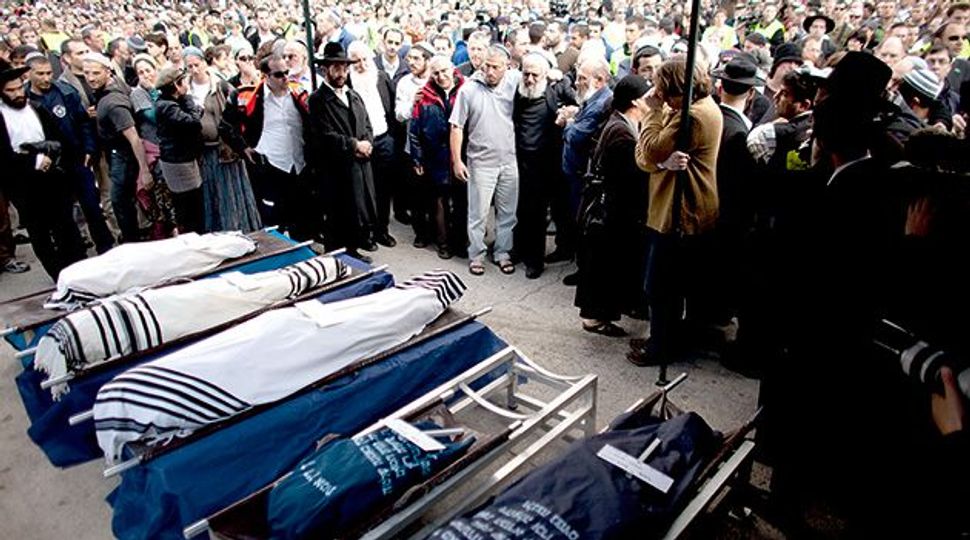 Burying the Dead: Five members of the Fogel family, two parents and three children, are buried after they were slain in their home in the West Bank settlement of Itamar. Image by Getty Images

JERUSALEM (JTA) — The surviving children and other family members of the five members of a West Bank family stabbed to death in a terrorist attack have sued the killers and the Palestinian Authority.

The three surviving children of Udi Fogel, 36, and Ruth Fogel, 35, and several other family members, including the grandparents who are now raising them, filed the lawsuit Monday in Jerusalem District Court, Ynet reported. The suit, which also names the Palestinian Liberation Organization and the Popular Front for the Liberation of Palestine, is seeking $114 million in damages.

The Shurat Hadin-Israel Law Center organization is representing the family.

Udi and Ruth Fogel, and three of their children — Yoav, 11; Elad, 4; and Hadas, 3 months — were stabbed to death in their beds in their home in Itamar nearly a year ago by two Palestinian teens from a nearby West Bank village.

Both assailants — Amjad Awad, 19, who worked as a laborer in Israel, and Hakim Awad 18, a high school student — have admitted to committing the murders and each were sentenced to five consecutive life sentences.

“To this day, the terrorists receive handsome salaries from the PA, a fact that entirely defies logic and is contrary to justice,” the Fogel family said in a statement. “In the filing of this claim we seek to send a message in the name of every person who has a heart.”