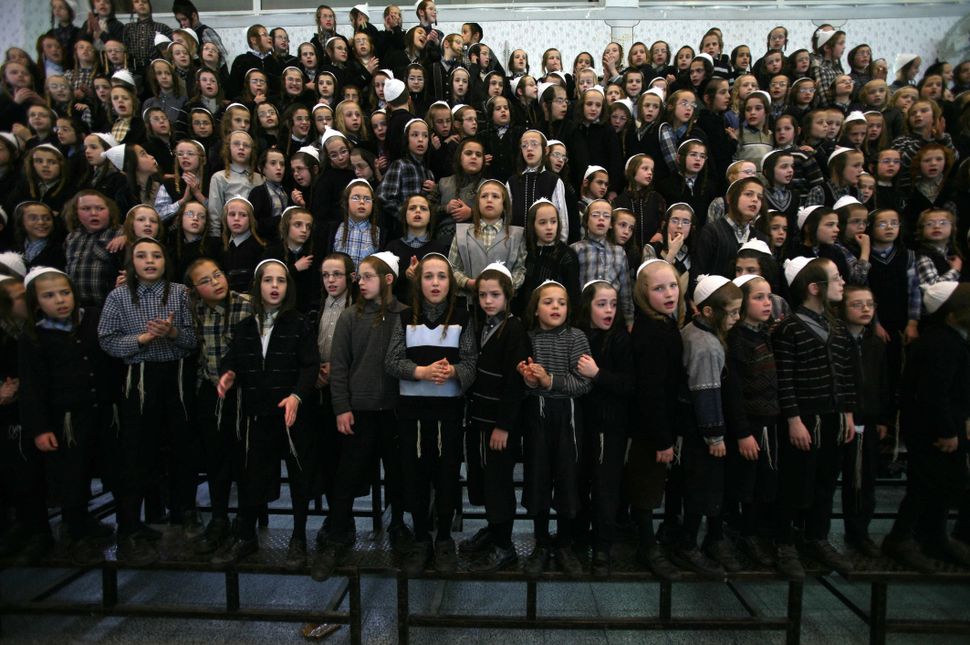 Schoolboys of the ultra-Orthodox Jewish Hasidim of Toldot Aharon group stand in their synagogue during the ‘Homesh’ ceremony in Jerusalem. The ceremony is attended by five-year-old children starting to study the Torah for their first time in their lives. Image by MENAHEM KAHANA/AFP/Getty Images

JERUSALEM (JTA) — A lawsuit filed against a venerated haredi Orthodox elementary school in Jerusalem alleges physical and sexual abuse within the institution.

The lawsuit was filed last week in Jerusalem Magistrates Court against Talmud Torah Kaminetz by a former student who is now an adult. He was assisted in preparing and filing the lawsuit by Din Ve’Cheshbon, a haredi organization that is fighting against sexual abuse cases and institutional coverups within the haredi sector.

Talmud Torah Kaminetz is held up as a standard-bearer in the Lithuanian stream of the haredi education system.

The lawsuit names a teacher, the principal and the institution as defendants. The incidents began about 18 years ago when the alleged victim was 9 years old and in the third grade.

A teacher who tested the students privately in Torah and other religious subjects allegedly repeatedly pinched the student’s private areas during the testing sessions. When the student started to skip the sessions, the principal allegedly called him to his office, where he would hit the boy, sometimes with a stick. On one occasion, according to the documents, it was with such force that the stick snapped in two.

In sixth grade, the student told a rabbi at the school about the incidents. The following day his mother received a call from the school accusing the child of spreading lies about the rabbis in the school. The mother said she was also told that she should be grateful that her son was accepted to the prestigious institution, even though the family is of Sephardic descent, and that if they continued to complain the boy and his brothers would be expelled from the school.