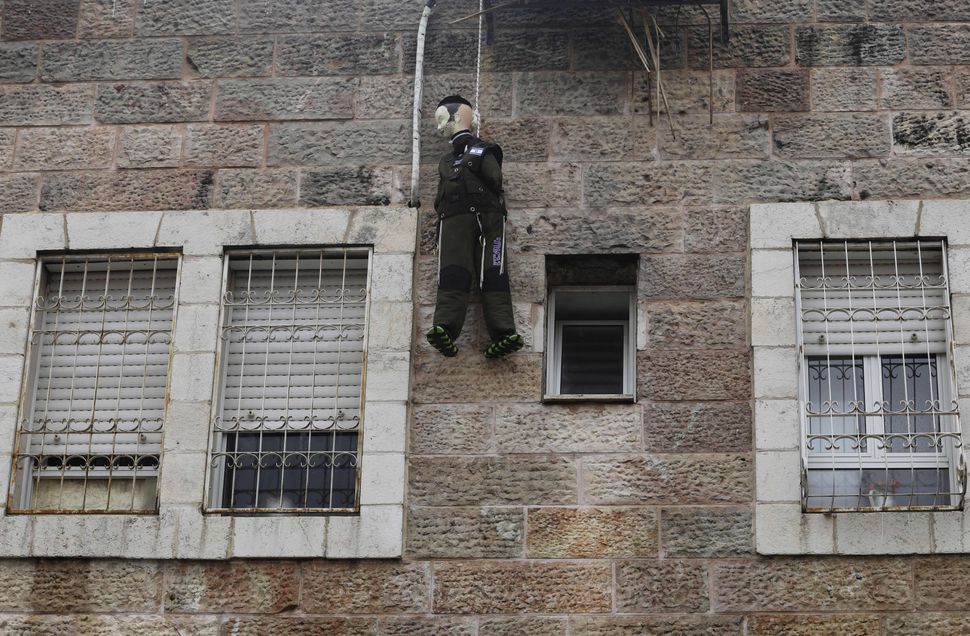 An effigy of a religious Israeli soldier hanged from the neck in the ultra-Orthodox Me’a She’arim neighborhood of Jerusalem. Image by MENAHEM KAHANA/AFP/Getty Images

(JTA) — Two effigies of Israeli soldiers with a rope around their necks were hung in predominantly Haredi areas of Jerusalem, in what Defense Minister Avigdor Liberman said was a “shocking” criminal act.

Police officers on Friday removed the effigies, one of which was soaked in flammable fluid, from a rooftop in Jerusalem’s Me’a She’arim neighborhood and from a rope dangling from a column on Chaim Ozer Street, the Israel Broadcasting Corporation reported.

The effigies had black kippahs on their heads, leading to speculations in the Israeli media that it was meant to intimidate Haredi soldiers who serve in the Israel Defense Forces.

Haredi Orthodox Jews were allowed an automatic exemption from serving until a 2014 law decreed they sign up for the army or other frameworks by 2017. Despite violent protests to this by some Haredis, including assaults against Haredi conscripts, their numbers are rising, according to the IDF. Their number rose dramatically from just a few dozen in 1999 to 2,850 recruits in 2016, according to the news site NRG.

“The sight of an effigy of a soldier hanging from a noose in Me’a She’arim is shocking,” Liberman wrote on Twitter. “As defense minister, my job is to afford security also to this kind of inciters. As a citizen, my duty is to fight them politically. The authorities’ duty is to put them behind bars. I expect the heads of the Haredi parties to condemn this act.”

Liberman has clashed with Haredi politicians over his support for increasing conscription among Haredis.