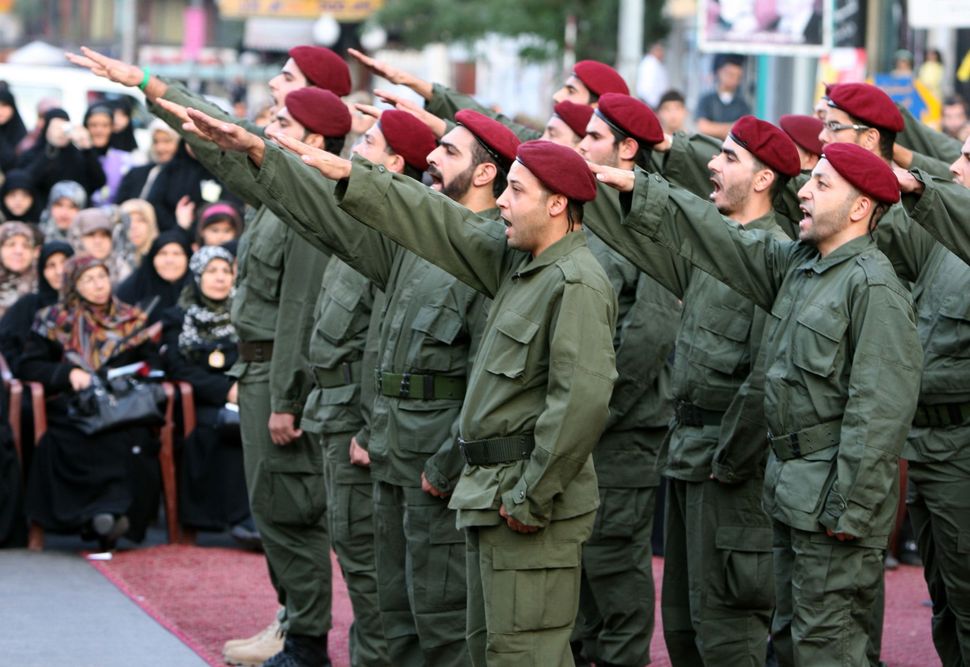 Hezbollah fighters parade during a ceremony organized by the militant Shiite Muslim group on the occasion of Martyr’s Day in the southern suburbs of Beirut November 11, 2009. Image by RAMZI HAIDAR/AFP/Getty Images

(JTA) — An Arabic-language newspaper based in London reported that Hezbollah has declared a state of emergency, fearing an Israeli attack.

The report Thursday in A-Rai al-Yum said that the Shi’ite militia has been on alert since Tuesday at least in southern Lebanon in anticipation of an Israeli strike on its forces or facilities. Citing sources within Hezbollah, the newspaper said this alert was over “secret maneuvers” that Hezbollah believes that the Israel Defense Forces have been carrying out recently.

Last month, Israel struck in Syria over what Israel said was a violation of its airspace by an unmanned aircraft that was being controlled by an Iranian command post in Syria. One of the fighter planes that carried out that strike crashed near Israel’s northern border after its pilots safely ejected.

Iran is an ally of the regime of Syria’s embattled president, Bashar Assad.

Hezbollah, which is an ally both of Assad and of Iran, has fought alongside the Islamic Republic and Assad’s forces against rebels and jihadists who have taken over large parts of Syria after the eruption in 2011 of a bloody civil war there.

According to foreign publications, Israel took out a third of Syria’s anti-aircraft capabilities along with the command post that the Jewish state said controlled the penetrating drone.