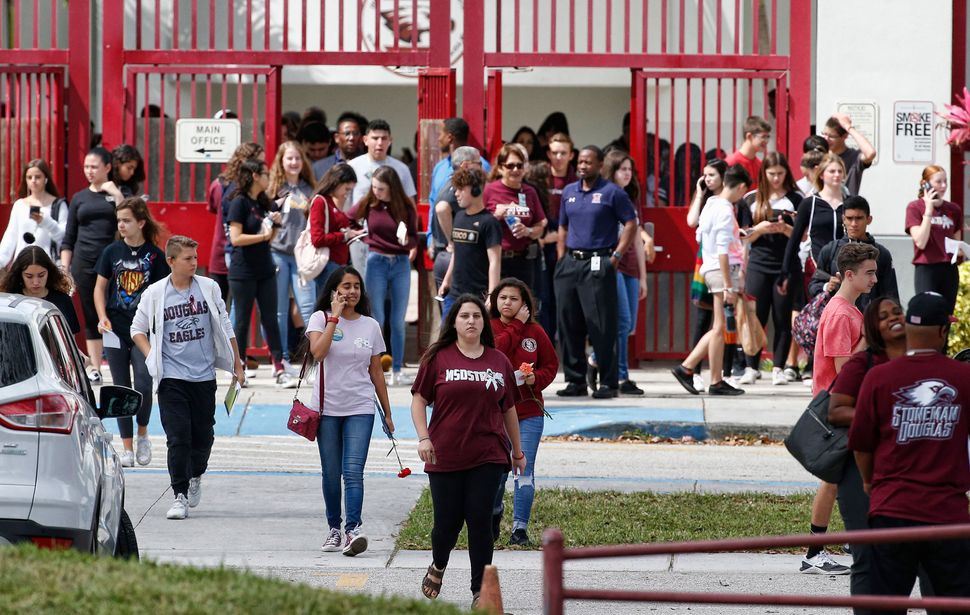 Students on their first day back at Marjory Stoneman Douglas after the February 14 shooting. Image by Getty

Two Jewish survivors of the shooting in Parkland, Florida, are launching a parallel gun reform movement to #NeverAgain, the New Yorker reported.

Adam Buchwald and Zach Hibshman are both 17, and they’re hoping to get kids across the country to have their parents sign a contract that they’ll “vote for leaders who put kids’ safety over guns.”

“Our classmates marched in Tallahassee, which we think is great,” Buchwald said, in reference to the #NeverAgain protests, which have been mirrored in cities across the U.S. “But our movement will make a major change in future elections.”

The contracts are purposefully loose: “I/We [parent name(s)] promise to [child name(s)] that I/We will vote for legislative leaders who support your children’s safety over guns!”

Buchwald and Hibshman say they’ve already had 100 contracts uploaded to their website.

They’ve received support, opposition and confusing responses to their campaign on social media.

“Someone wrote a message on Twitter saying we needed one for people who don’t have children. Who just have dogs and cats,” said Hibshman.

Many people have responded with derision and scorn for their campaign. The boys do their best not to get involved. Their main comeback? “Thanks for voicing your opinion.”