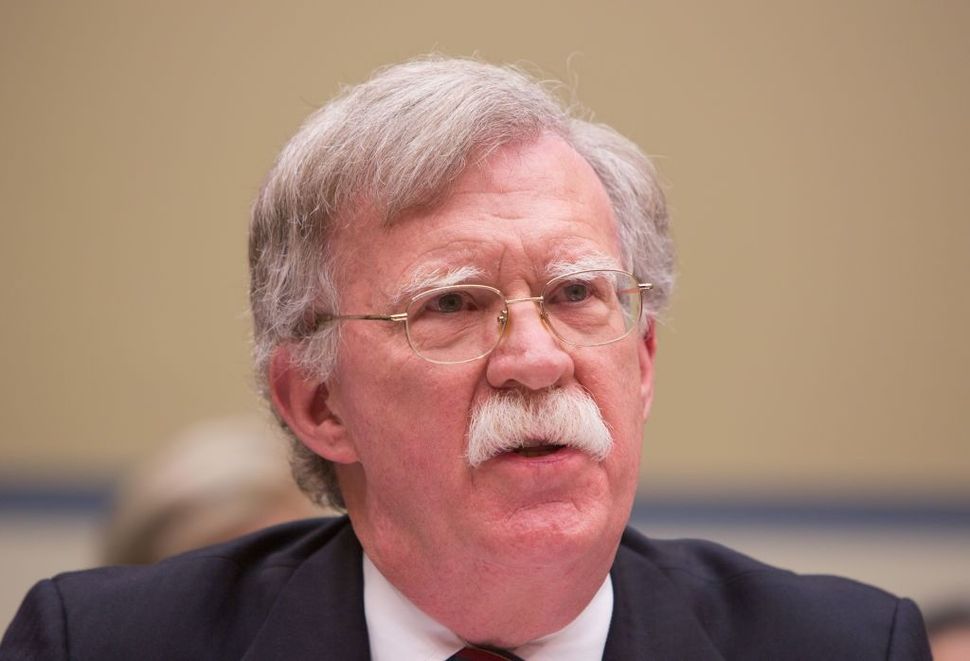 Former U.S. Ambassador to the United Nations John Bolton speaks before Congress on moving the U.S. Embassy in Israel to Jerusalem. Image by Tasos Katopodis/Getty Images

WASHINGTON (JTA) — President Trump named as his national security adviser John Bolton, a hawk who has said military strikes may be inevitable as a means of preventing Iran from acquiring a nuclear weapon.

The White House announced Thursday evening that H.R. McMaster was leaving the position and that Bolton would take his place by April 9.

Naming Bolton suggests Trump is ready to pull out of the 2015 Iran nuclear deal by May 12, the deadline for Trump to waive sanctions. The deal trades sanctions relief for a rollback of Iran’s nuclear program. Bolton is a staunch opponent of the deal, as is Mike Pompeo, the CIA chief Trump nominated last week to replace Rex Tillerson as secretary of state.

Bolton has multiple times striking Iran to stop it from going nuclear may be inevitable. “I don’t make any disguise of the idea that ultimately it may take an Israeli strike against Iran’s nuclear program to stop it,” he told the conservative Washington Free Beacon last August.

Tillerson and McMaster both don’t like the deal but counseled not pulling out of it now that it is in place, because Iran is complying with its narrow strictures, and pulling out would remove whatever leverage the United States has with U.S. allies to pressure Iran outside the deal’s confines. That leaves James Mattis, the defense secretary, as the only Cabinet level official who opposes leaving the deal.

Bolton has close relations with the pro-Israel community stemming from his success in 1991 in getting the United Nations to rescind its Zionism is racism resolution. George W. Bush, nominated Bolton as ambassador to the United Nations in 2005 and named him acting ambassador. Bolton never cleared the Senate nominating process, in part because of his hawkishness on Middle Eastern issues, but also because subordinates at the State Department emerged to describe him as an abusive boss.

McMaster got along well with his Israeli counterparts but angered some on the right wing of the pro-Israel community because of reports that he blocked Trump’s recognition of Jerusalem as Israel’s capital. Trump ultimately recognized Jerusalem last December.