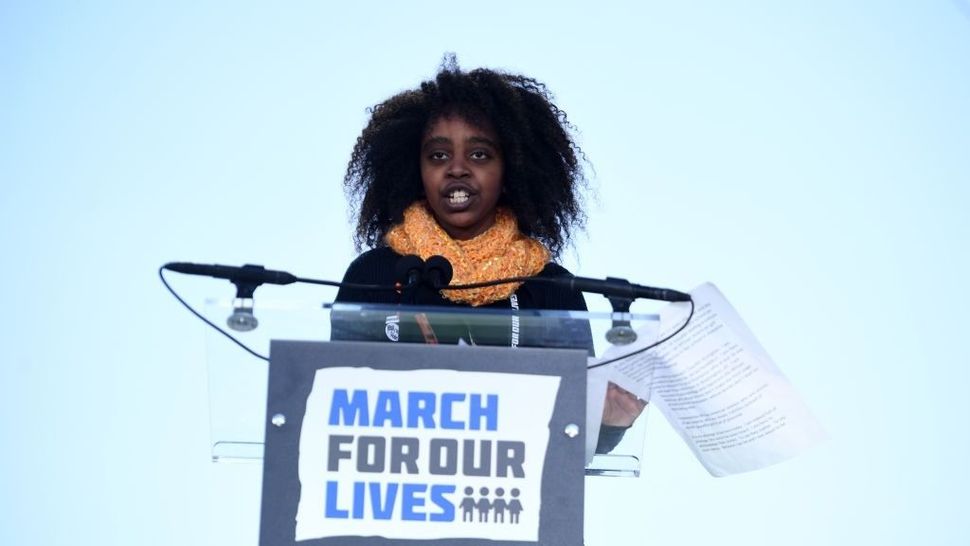 Alexandria, Virginia, student Naomi Wadler speaks during the March For Our Lives rally against gun violence in Washington, DC on March 24, 2018. Image by JIM WATSON/AFP/Getty Images

One of the most powerful speeches at the March for Our Lives gun control rally in Washington, D.C. was given by 11-year-old Naomi Wadler, who said she was there to represent other African-American women whose experiences with gun violence are often not covered by the media.

Wadler, who is African-American and Jewish, had organized a walkout at her elementary school in Alexandria, Virginia as part of a national protest on March 14. They stood outside for 18 minutes — one minute longer than the rest of the country — to honor Courtlin Arrington, a black girl from Alabama who had been killed in a school shooting in Alabama after the high school massacre in Parkland, Florida.

“I represent the African American women who are victims of gun violence, who are simply statistics instead of vibrant, beautiful girls that fill a potential,” Wadler said.

She pointed out that gun violence disproportionate affects women and people of color.

“For far too long, these names, these black girls and women have been just numbers,” she added. “I’m here to say ‘Never Again!’ for those girls too. I’m here to say that everyone should value those girls, too.”

She dismissed the idea that she was being coached on what to say.

“My friends and I might be still be 11 and we might still be in elementary school, but we know life isn’t equal for everyone and we know what is right and wrong,” she said. “We also know that we stand in the shadow of the Capitol, and we know that we have seven short years until we too have the right to vote.”

Wadler, a fifth-grader at George Mason Elementary School, had received pushback from her school’s administration because the adults felt that walking outside in the middle of the day was not safe.

“How we be will be safe in our own classrooms in the world we live in now when it’s okay for someone to walk into a store with an expired ID and buy an assault rifle?” Wadler responded at a local town hall.

In all, about 60 students joined Wadler’s walkout.

Covering a walkout this morning at an elementary school in Virginia, and the 11-year-old organizers had a press packet ready for me. pic.twitter.com/eeElhGciid

Wadler’s speech was one of the most memorable at the march. It was shared on Twitter by Sen. Kamala Harris and praised by prominent activists and journalists.