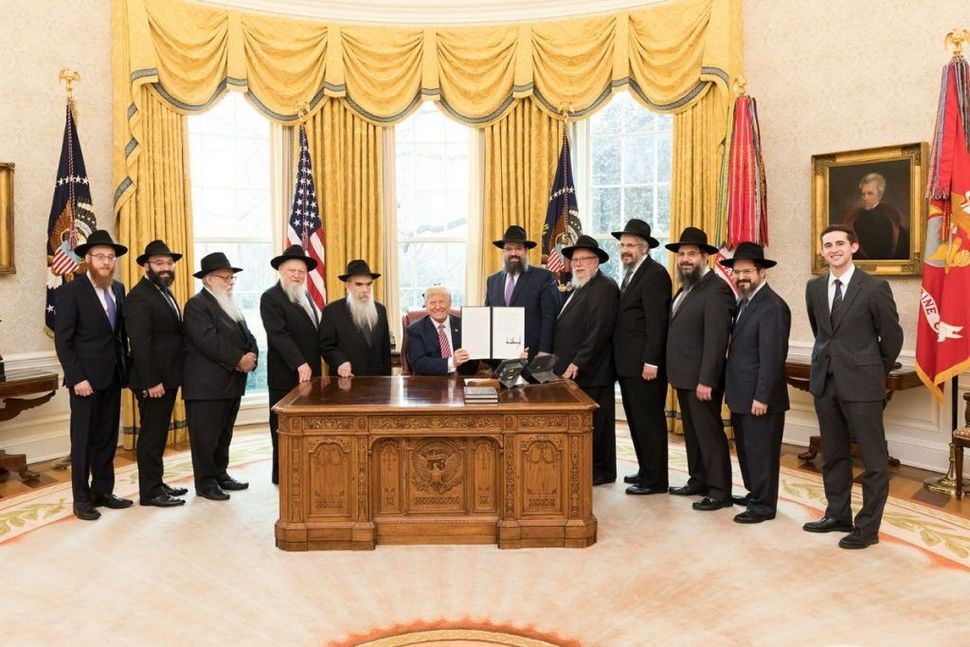 Chabad rabbis meet with President Trump as he proclaims Education and Sharing Day on the anniversary of the birth of the Lubavitcher Rebbe, Rabbi Menachem Mendel Schneerson. Image by White House

(JTA) — President Trump issued a proclamation in honor of Education and Sharing Day, marking the anniversary of the birth of the last Lubavitcher rebbe, Rabbi Menachem Mendel Schneerson.

Trump met Monday in the Oval Office with a delegation of rabbis from the Chabad-Lubavitch movement.

The rabbis presented two gifts to the president: a silver menorah and a leather-bound Passover Haggadah with the president’s name embossed in gold on the cover. The president also inscribed an identical Haggadah to be sent to Jewish soldiers on active duty to use at their seders.

Six other presidents, from Jimmy Carter to Barack Obama, have designated March 27 as Education and Sharing Day.

In the proclamation, Trump noted that the rebbe “recognized that access to education, paired with moral and spiritual development, could transform the world for good, and he devoted his life to these principles. His commitment to invest in the lives of the next generation led to the establishment of academic and outreach centers to help grow and engage young minds and provide them with spiritual and material assistance. Thanks to his drive and dedication, these educational and social service centers can be found in every state and throughout the world.”

Proclamations or the equivalent were issued this year by the governors of all 50 states and the mayor of Washington, D.C., recognizing the day, as well as in about 100 other cities across the United States, according to Chabad.org.