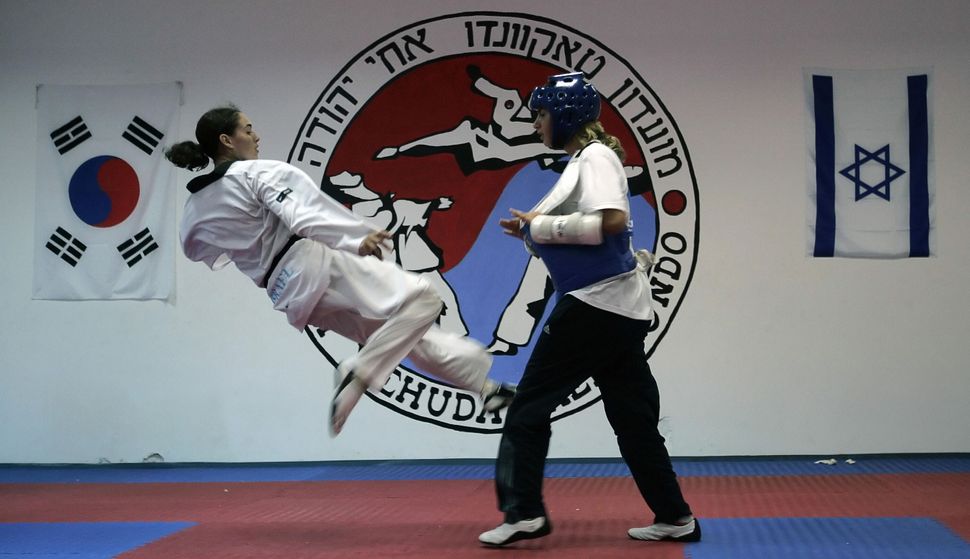 Israeli taekwondo athlete Batel Gatterer (L) jumps to kick an opponent during a training session at a taekwondo center at the Malcha Stadium in Jerusalem. Image by JONATHAN NACKSTRAND/AFP/Getty Images

JERUSALEM (JTA) — Four young Israeli athletes have been banned from competing in the taekwondo world junior championship event in Tunisia.

The competitors were banned by order of a court in the capital Tunis, which was responding to a lawsuit filed by the National Commission for Supporting Arab Resistance and Opposing Normalization and Zionism against the president of the Tunisian taekwondo federation, the Associated Press reported.

The court decision says that the four athletes cannot be invited or hosted at the competition.

The president of the Tunisian taekwondo federation told the Associated Press that the four Israelis did not properly fill out their registration papers. The delegation, which requested visas to travel to Tunisia well in advance, had already agreed to compete without being acknowledged as Israeli, according to Ynet.

Success in the competition is necessary to participate in the Youth Olympic Games to be held in Argentina in October, Ynet reported.

One of the athletes denied a spot in the tournament, Avishag Samberg, won a bronze medal in the previous Junior World Championships in November, 2016, and in the European championships held in November.

The chairman of the Israeli Taekwondo Federation, Michel Madar, who also serves on the board of World Taekwondo, entered Tunisia on his French passport to attend the world federation’s general assembly and lobby for the Israelis’ participation. However he was turned away at the airport after a Tunisian airport official noticed that his passport had been issued in Jerusalem, according to Ynet.

The Israeli delegation to the Abu Dhabi Grand Slam judo tournament in October competed without being identified as Israeli. Two Israelis won medals but the country’s national anthem was not played and the flag was not displayed.