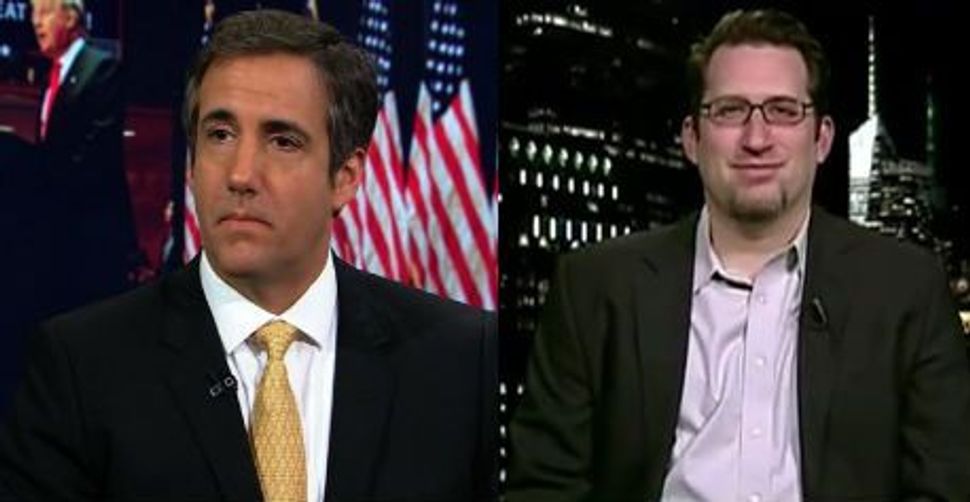 (JTA) — The FBI’s raid on the offices of President Trump’s personal lawyer, Michael Cohen, has unsettled the White House, the markets — and other men named Michael Cohen.

Twitter users who share the common Jewish moniker with Trump’s attorney were simultaneously amused and abashed as news of their namesake’s legal jeopardy broke around the net.

They included Michael A. Cohen, a columnist for the Boston Globe and frequent critic of the president, who actually had to write about the raid in Tuesday’s paper. “We are in unchartered territory,” he wrote in his column. “On Monday morning, FBI agents raided the office and home of President Trump’s attorney, Michael Cohen (the other one).”

Michael A. Cohen also tweeted about the “other one”:

My latest for @GlobeOpinion on some guy named Michael Cohen, who, as far as I’m aware, does not have a dog named Baxter https://t.co/rGqK4l9eYD

Michael Cohen, who covers sports for the Milwaukee Journal Sentinel, assured followers that it wasn’t him:

Nobody raided my apartment.

He was comforted by a follower named Rob Porter, who shares a name with the former White House staff secretary who stepped down following allegations that he had abused his two former wives:

I feel your pain Michael.

Michael E. Cohen, a writer and editor from Santa Monica, California, is even careful to distinguish himself in his Twitter handle:

Been waitin’ a long time for this pun to become operative! https://t.co/3BcZQ6EVG5

And Canadian podcast maker Michael Cohen tweeted on behalf of all the Michael Cohens whose offices were not raided by the FBI on Monday: