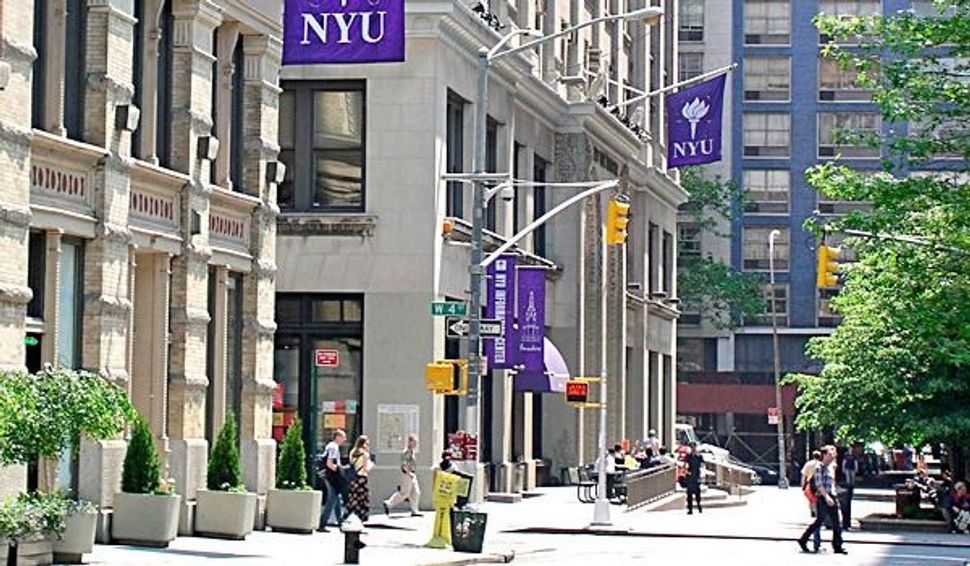 NEW YORK (JTA) — A pledge by 51 student groups at New York University to boycott Israel and two pro-Israel campus organizations is a sign of “animosity” at the private campus, a Jewish student leader said.

In the resolution, which was released Monday, the student organizations express their support for the Boycott, Divestment and Sanctions movement, commit to a boycott of goods from Israel and Israeli academic institutions, and call on the university to divest “from companies and funds that are complicit in the Israeli occupation of Palestine.”

The student groups also pledge not to co-sponsor any events with two Israel advocacy campus groups — Realize Israel and TorchPAC — as well as eight off-campus groups, including Birthright-Taglit, the American Israeli Public Affairs Committee and the Anti-Defamation League.

NYU’s chapters of Jewish Voice for Peace and Students for Justice in Palestine organized the resolution, and its signatories includes groups such as the African Student Union, the Black Students Union, College Libertarians, the Mexican Student Association and the Muslim Students Association.

In a Friday statement to JTA, the executive director of the university’s Bronfman Center for Jewish Life, Rabbi Yehuda Sarna, denounced the letter and said that students of all religious and political beliefs were welcome at the center.

“[T]he current state of affairs — in which a number of student organizations resolved to boycott two other student groups — is a source of sorrow and disappointment to me,” Sarna said. “The University should be about people coming together, not about people refusing to speak to those with differing views.”

Leaders of the two pro-Israel groups singled out in the resolution told JTA on Friday that they were surprised by the momentum it had gained.

Realize Israel President Adela Cojab, 21, described the climate surrounding Israel at NYU as “one of animosity.”

“I’m surprised about the scale because I did not expect so many people and so many groups to turn against students the way that they have,” said Cojab, who also serves as an alternate senator representing the Jewish community in the school’s student government.