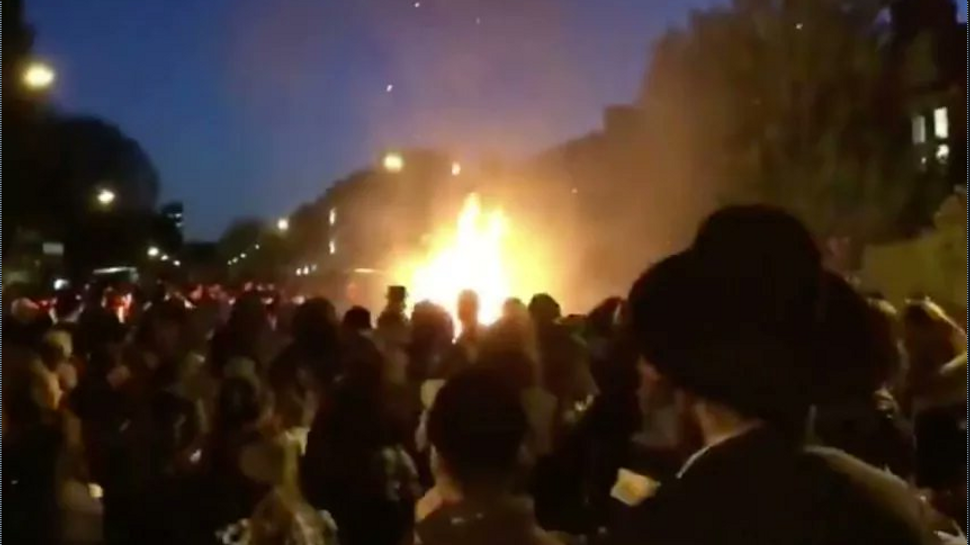 The explosion of a Lag B’Omer pyre in north London. Image by Hatzola/Twitter

The bonfire had been kindled for Lag B’Omer, a holiday that falls halfway between Passover and Shavuot. It is traditional in Israel and among religious Jews to create bonfires, and some ultra-Orthodox communities make pyres that can reach 30 feet tall. The tradition is a commemoration of the rabbinic sage Shimon Bar Yochai, who is said to have died next to a supernatural flame.

The explosion was reportedly triggered by the Hasidic Jews placing cell phones in the fire as a symbolic rejection of the secular world. Leading rabbis in Stamford Hill are adamantly against the use of cell phones in their communities. Observers have speculated that the batteries in the phones may have combusted after exposure to the enormous flames.

The JC reported that possibly over 30 people were injured. Video footage of the moment of the explosion show men standing in a circle around the ceremonial pyre as flames slowly begin consuming it. The closest ones appear no more than a few feet away. Then an enormous blast erupts, sending dozens of people falling to the ground.

Yeshiva World News reported that a rabbi leading the ceremony gave a speech about the dangers of cell phones before starting the fire, and announced he would be burning a cell phone. YWN said the rabbi gave a similar speech in 2017.

Many of the people injured by the blast were EMS workers from Hatzolah, a private ambulance service that serves the ultra-Orthodox communities in the UK and in parts of the U.S. The JC said that Hatzolah treated 20 people for minor injuries and other news reports said that 10 people went to the hospital with superficial burns.