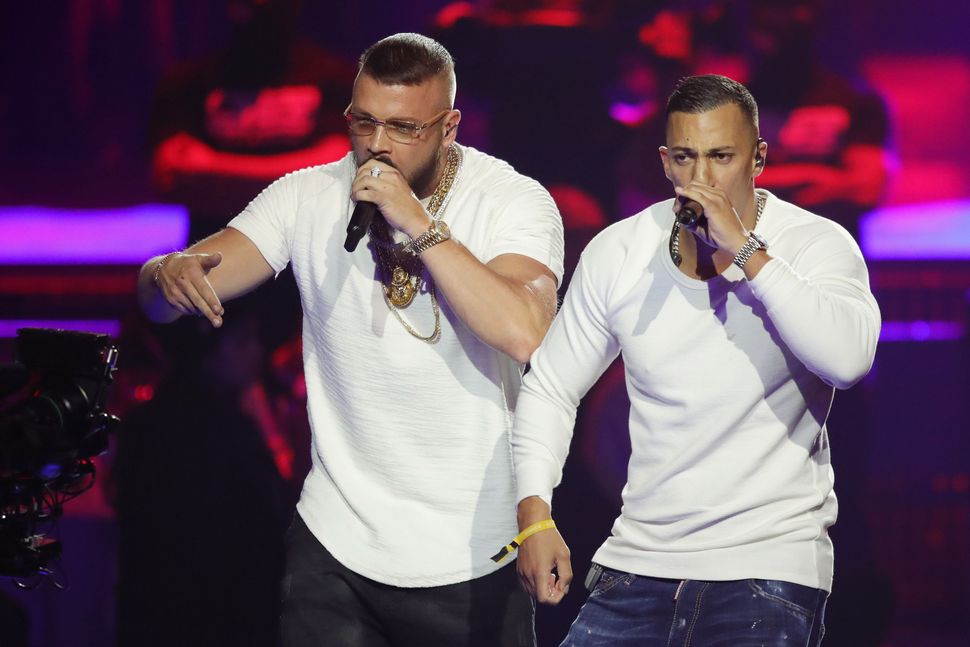 Farid Bang and Kollegah perform at the Echo Awards on April 12, 2018 in Berlin, Germany. Image by Andreas Rentz/Getty Images

(JTA) — The rappers who brought down a prestigious German music prize over songs containing anti-Semitic lyrics will visit Auschwitz.

On April 12, they won an Echo Award in the hip-hop category for an album with lyrics that boasted of physiques “more defined that those of Auschwitz inmates” and called for “another Holocaust; let’s grab the Molotov” cocktails. The album’s title in English is “Young, Brutal, Good Looking 3.”

Last month, the executive board of Germany’s Music Industry Association, or BVMI, announced that it had decided to discontinue the Echo Awards. “The Echo brand is so badly damaged that a complete new beginning is necessary,” BVMI said in a statement. “Echo will be no more.”

“The events surrounding this year’s Echo, for which the board apologized, cannot be reversed, but we can ensure that such a mistake does not happen again in the future,” the board of the association also said.

Following the controversy, Kollegah and Farid Bang apologized for the lyrics, and their record label put up $125,000 for a campaign to fight anti-Semitism.

Award organizers had cited “freedom of artistic expression” in defending their decision to nominate the two rappers.

Artists are nominated for Echo Awards based on sales numbers and not the quality of their work.