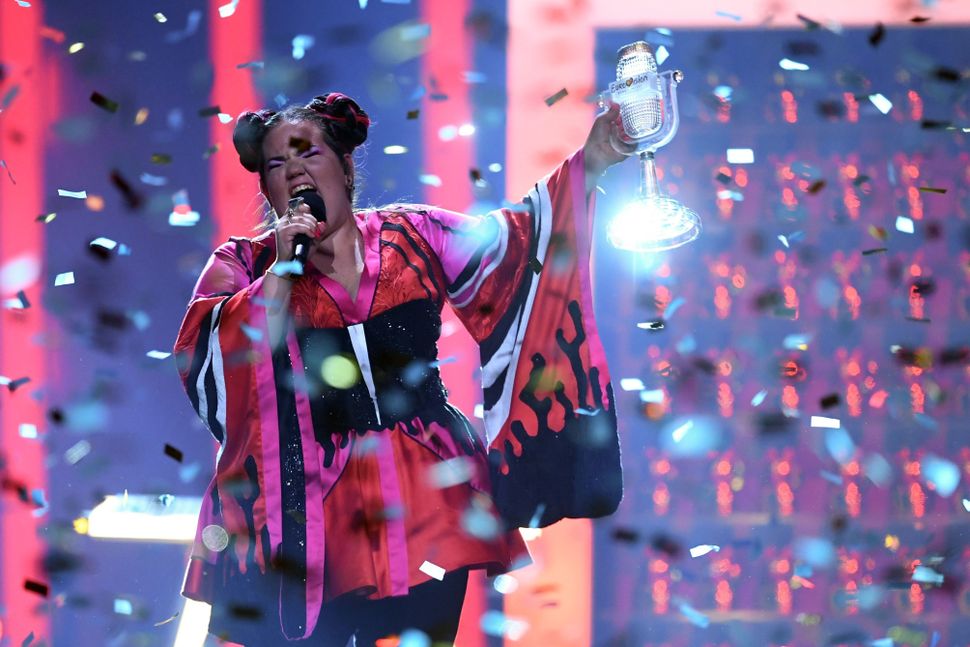 Israeli singer Netta performs with the trophy after winning the Eurovision Song Contest 2018 in Lisbon, on May 12, 2018. Image by FRANCISCO LEONG/AFP/Getty Images

(JTA) — For the fourth time in its four decades of participating in the Eurovision song contest, Israel has won the international competition.

The song “Toy” by Netta Barzilai, 24, secured Israel’s victory at the Eurovision contest this year at the Finals Saturday in Lisbon, Portugal. The victory means Israel will host the event next year. Barzilai’s song is a warning to a boy not to treat her like a toy.

Israel’s song, which is performed in English, has consistently been ranked on betting sites in first place or at least in the top three at the festival, a hugely popular phenomenon in Europe that combines elements of “American Idol”-style song competitions and the Olympic Games. The score is determined by points given by the contest’s official juries and by callers. “Toy” won the match with a combined score of 529 points, giving is a huge lead of 93 points over Cyprus, which came second and a 187-point lead on Austria in third place. The score for Toy was the fourth-highest in the contest’s history.

The track by Barzilai, whose stage name is Netta, is about female empowerment and was inspired by the #MeToo movement, she has said.

“The song has an important message,” she is quoted as telling the Daily Express before winning the contest, which features artists from dozens of countries in and around Europe, including Australia.

“The awakening of female power and social justice, wrapped in a colorful, happy vibe,” she said.

Israeli Prime Minister Benjamin Netanyahu congratulated Netta and indicated that the festival next year will be hosted in Jerusalem.

“You have brought the State of Israel a lot pride. Next year in Jerusalem!” wrote Netanyahu on Twitter to Netta.

Speaking about the chicken noises she makes during the song, she told Wiwibloggs: “The noises are supposed to imitate the voices of a coward – a chicken. Someone who doesn’t act the way he/she feels and treats you like a toy.”