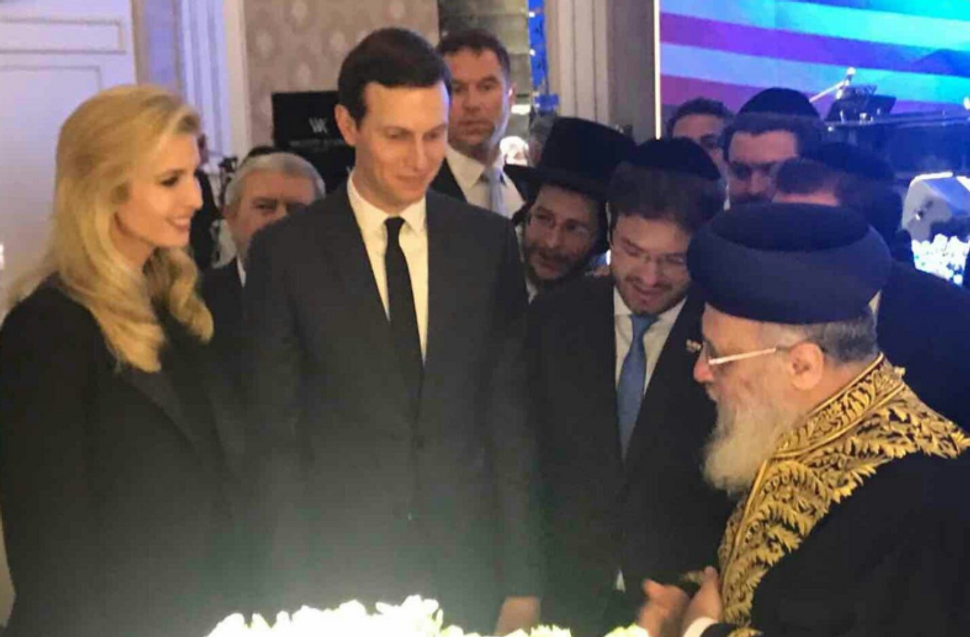 Jared Kushner and Ivanka Trump reportedly received a blessing in Jerusalem on Sunday from Israel’s Sephardic Chief Rabbi Yitzhak Yosef — who was condemned by the Anti-Defamation League earlier this year for comparing black people to monkeys.

Kushner and Trump, both senior advisors to President Trump, are in Israel as part of the American delegation celebrating the moving of the U.S. Embassy from Tel Aviv to Jerusalem. Jewish Insider reported that in addition to having dinner with Prime Minister Benjamin Netanyahu and attending a ceremony at the Ministry of Foreign Affairs, they also received a blessing from Yosef, one of the country’s two chief rabbis.

During a sermon in March on how to properly say a blessing, Yosef used the Hebrew word “kushi,” which was used in the Bible but is now considered a derogatory term for black people.

“You can’t make the blessing on every ‘kushi’ you see — in America you see one every five minutes, so you make it only on a person with a white father and mother,” he said, according to the Times of Israel. ”How do would you know? Let’s say you know! So they had a monkey as a son, a son like this, so you say the blessing on him.”

The ADL said in a tweet at the time that the remarks were “utterly unacceptable.” Yosef’s office responded that he was merely citing the Talmud, which also has similar language about other animals like elephants.

Yosef had also attracted criticism for other comments in the past few years, such as implying in 2017 that secular women behave like animals because of their immodest dress and claiming in 2016 that according to Jewish law, non-Jews are forbidden from living in Israel.