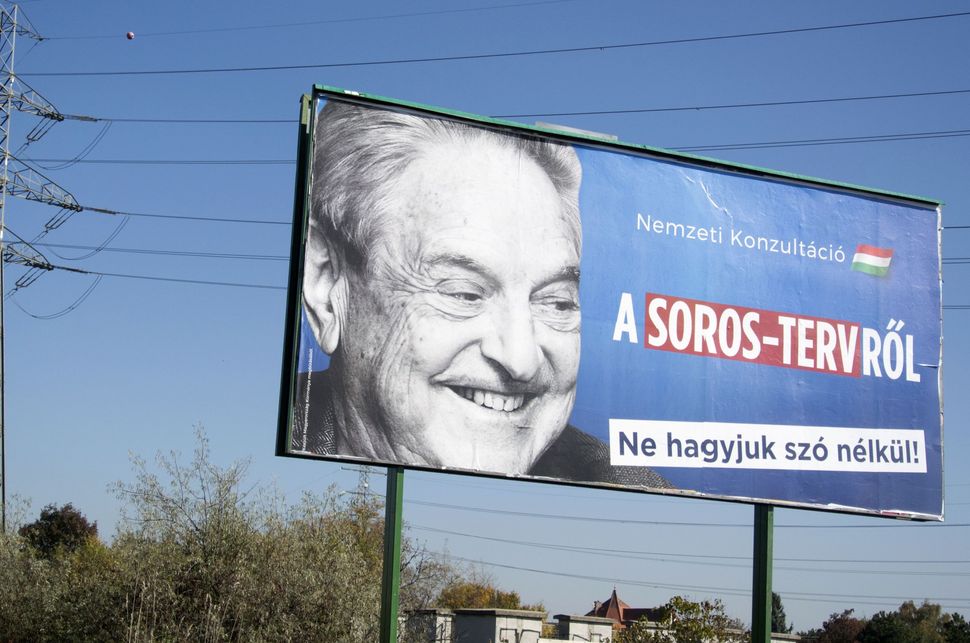 An anti-Soros ad in Hungary. Image by Getty

The Hungarian billionaire and philanthropist has been the target of sustained anti-Semitic rhetoric by Hungary’s Prime Minister, Victor Orban. Orban, an avowed nationalist and critic of Western Europe’s embrace of refugees, blamed Soros for much of the country’s economic woes ahead of his recent reelection. Soros’ face adorns political ads across the country which read, “Don’t let Soros have the last laugh.”

Soros’ Open Society Foundations, which promote democracy and free speech, have also endured threats of legal sanctions from the government. One law proposed by Orban would levee steep taxes against any organization that worked with refugees or promoted refugee rights. The law was termed the “Stop Soros” bill.

“The government of Hungary has denigrated and misrepresented our work and repressed civil society for the sake of political gain, using tactics unprecedented in the history of the European Union,” said Patrick Gaspard, president of the foundations.

The Foundations plan to continue working in other Easterners European countries. They announced that they will be moving their main offices to Berlin.

Another Soros institution funded by Soros, Budapest’s Central European University, may also be forced to shutter operations in Hungary. Last spring, Orban’s governing coalition passed a bill that would force CEU to open an American campus — something the university says is cost prohibitive. The law also barred the school from admitting new students after January 2019 if it does not reach a compromise with the government.

Soros’ Foundations have about 100 employees in Budapest. After the company’s announcement on Tuesday, they all began packing up their offices.