Is This German Cartoon Of Benjamin Netanyahu Anti-Semitic? 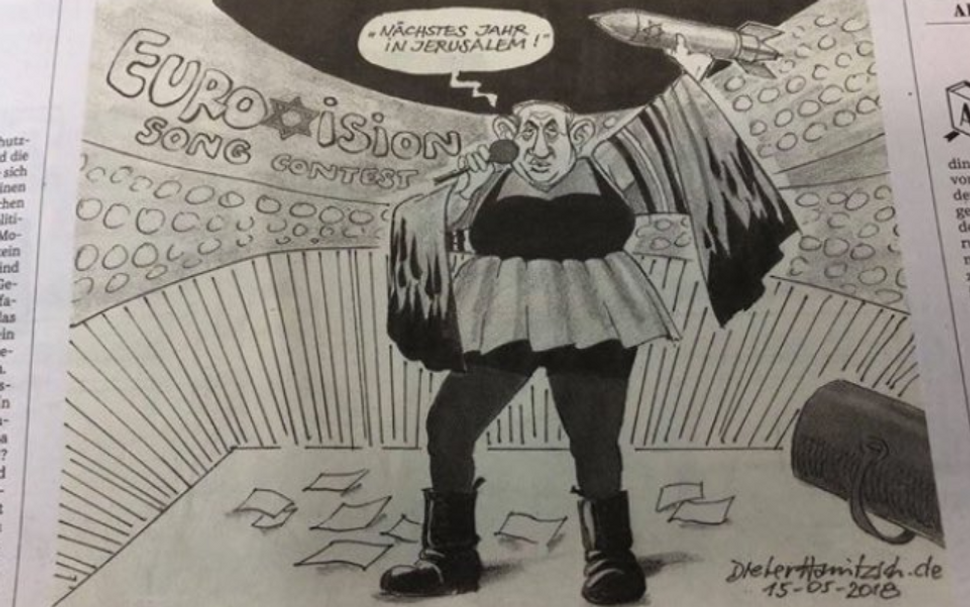 A cartoon published in the Süddeutsche Zeitung, for which the editor-in-chief subsequently apologized. Image by twitter

A cartoon featuring Benjamin Netanyahu holding a nuclear bomb at the Eurovision song contest has been dubbed anti-Semitic by critics, the Times of Israel reported.

The cartoon, published in the German daily Süddeutsche Zeitung, is a riff on Israel’s recent win at Eurovision, which gives them the chance to host next year’s song contest. The singer Netta Barzilai won with her rendition of the Israeli mega-hit “Toy.” In celebrating the win, she exclaimed “Next year in Jerusalem!” onstage.

The cartoon features Netanyahu in a pop-star get-up, holding a nuclear missile emblazoned with a Star of David, telling the crowd, “Next year in Jerusalem.” There is also a Star of David in place of the “v” in Eurovision.

An outcry from German Jewish readers on Facebook accusing the cartoon of being anti-Semitic led the paper’s editor-in-chief to issue an apology. Wolfgang Krach published the apology in the paper Wednesday. He specifically pointed to the use of the Star of David in place of the “v” as a source of controversy.

“Despite the caricaturist’s intention, one can understand the drawing differently and take it as anti-Semitic,” Krach wrote. “Its release was therefore a mistake for which we apologize.”

The cartoonist, however, distanced himself from the paper’s apology.

“That the editorial apologized is their business. I do not apologize,” Dieter Hanitzsch, 85, told a local Jewish paper. He said that the accusation of anti-Semitism “does not affect me. I did not mean it that way. I would like to be able to criticize Netanyahu’s policy, even as a German.”

In 2013, the Süddeutsche Zeitung came under fire for publishing a cartoon depicting Israel as a hungry demon.

Is This German Cartoon Of Benjamin Netanyahu Anti-Semitic?