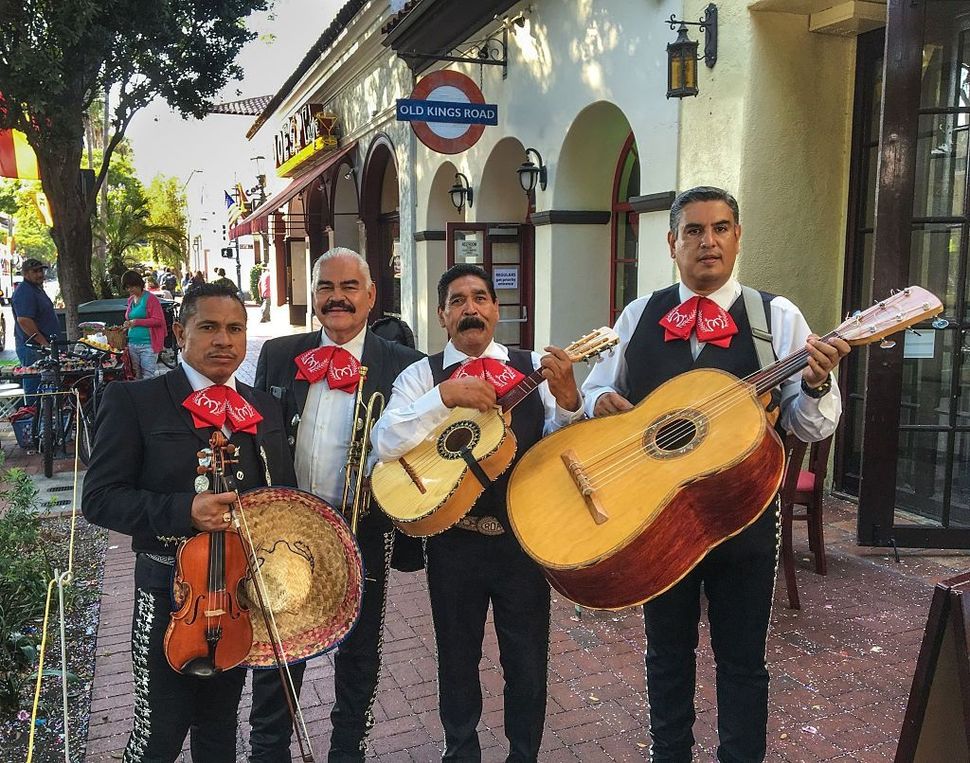 They came. They strummed. They taught Aaron Schlossberg a lesson.

A mariachi band led scores of protesters in a chorus of ‘La Cucaracha (The Cockroach) Friday evening outside the Manhattan home of the lawyer who disgraced himself by ranting at Spanish-speaking people in a deli two days earlier.

A crowd gathered outside the West 60th Street apartment building where reporters staked out Schlossberg, who is Jewish, after the news broke about the xenophobic rant.

A five-man mariachi band wearing silver and black outfits drew huge cheers as they piled out of a bus.

About 100 people cheered and sang along with the band and cheered “Viva America” when they finished.

A GoFundMe was set up to raise money to send the band to croon for Schlossberg, who threatened to call immigration agents on the deli’s Spanish-speaking employees.

The organizer, Alt Immigration, exceeded its $500 goal, raising $1,069 in 14 hours. In an update, it wrote that a local New York City mariachi band agreed to perform for free, and that donations were no longer needed.

Duck tacos were donated to the crowd by Jade Sixty, an Upper East Side Asian restaurant.

The mariachi band leads off with ‘La Cucaracha’ at the #latinparty outside a certain racist’s condo #HolaAaron pic.twitter.com/swm07OtUFa

The campaign reads: “We are countering hate and racism with the sound of music.”

Twitter has been abuzz with backlash, and users have been diligent in trashing Schlossberg’s internet presence.

His law firm’s Google page received nearly 3,000 one-star reviews, many of them attesting to Schlossberg’s alleged virulent racism. His firm’s Yelp page currently has over 2,000 one-star reviews. Users posted photo-shopped images of Schlossberg in a sombrero, or simply tagged pictures of Mexican food with the location of his firm’s offices in Midtown.

He’s since been kicked out of the office space and nearly 25,000 people have signed a petition calling for him to be disbarred.

Schlossberg, who gave $500 to President Trump’s campaign in 2016, has also been spotted at several pro-Trump, anti-immigrant and pro-Israel protests.