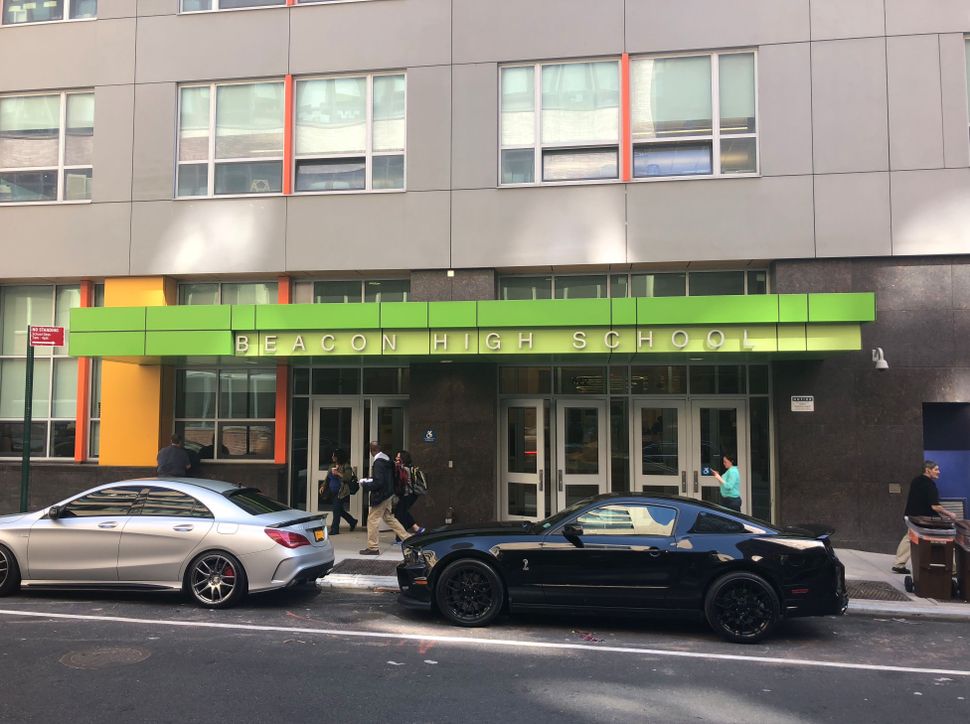 Several students at Manhattan’s Beacon School told the Forward they supported a moment of silence for Palestinians killed during the Gaza protests, May 21, 2018. Image by Ben Fractenberg

Several students at Manhattan’s elite Beacon School told the Forward Monday they were supportive of a moment of silence held last week for the dozens of Palestinians killed by Israeli forces, which angered some parents.

An announcement was made on May 15 near the end of the school day, students at the selective public high school said.

“A lot of us are really concerned with what Israel is doing,” said junior Matt Klass, who is Jewish. “I think there is some disparity in how the parents feel and how the students feel.”

Klass added that a large percentage of the student body was Jewish, but more left-leaning and sympathetic to Palestinians and a two-state solution.

Another student said she was surprised by the controversy since the school is very politically minded and will often address complex issues.

“I am for [the moment of silence]. I was outraged after other people were outraged by it,” said the junior, who just gave her last name, Kahn. “This is about people rightfully protesting and getting hurt as a result of it.”

Fellow junior Rosie Hendricks said she wasn’t offended by the announcement but felt they could have “given more context” about the history of the Israeli-Palestinian conflict.

“I think it was fine. It was not intended to support terrorists,” she said.

Some parents expressed outrage to the New York Post, who first reported the story on Saturday.

“I just don’t think any school should be promoting a moment of silence for terrorists. What if it was Islamic terrorists in ISIS?” a Jewish student’s mother told the Post. “No school would be having that over the loudspeaker.”

“It is disgraceful to mourn the death of Hamas terrorists,” Klein reportedly told the Post.

The ZOA did not return an immediate request for comment made by the Forward.

A New York City Department of Education spokesman said they were supportive of the announcement.

“We support civic engagement and advocacy amongst students, and encourage schools to provide inclusive environments where students are able to respectfully discuss current events,” DOE representative Doug Cohen said in a statement.

The principal of the Beacon School was not immediately available to comment.