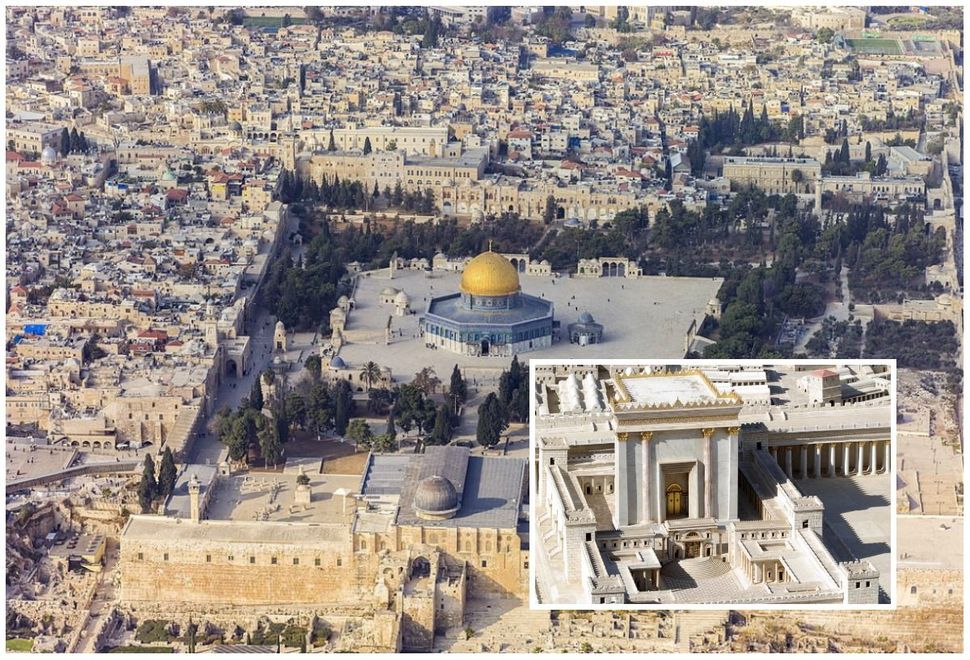 The Temple Mount in Jerusalem. Inset: A rendering of the Second Temple. Image by Wikimedia/Forward Montage

The U.S. Ambassador to Israel David Friedman is facing criticism after appearing in a photograph Tuesday next to a photoshopped image of Jerusalem with the fabled Third Temple in place of the Dome of the Rock and the Al-Aqsa Mosque, Haaretz reported.

The picture was taken while Friedman was touring of the city Bnei Brak with a humanitarian organization that provides services to children. It’s not clear that Friedman knew the content of the image. An official from the U.S. Embassy told Haaretz that they had asked for an apology from the humanitarian organization “for allowing one of their staff to present this controversial image to the ambassador during the visit.”

Friedman “was not aware of the image thrust in front of him when the photo was taken,” the Embassy said in a statement. “He was deeply disappointed that anyone would take advantage of his visit to Bnei Brak to create controversy.”

“The U.S. policy is absolutely clear: we support the status quo on the Haram al-Sharif/Temple Mount,” the statement added.

Critics immediately seized on the image as evidence that Friedman supports the extreme right wing Jewish groups, which hope to build a Third Temple on the Temple Mount. The Second Temple was destroyed in 70 C.E., and the Dome of the Rock and the Al-Aqsa Mosque have been on the site of the former Temple since around the year 700 C.E.


Friedman has been seen as an ally of the Israeli religious right. He has helped raise millions of dollars for a West Bank settlement that is considered a center of support for the settler movement.