When Synagogues Get Second Lives — As Nightclubs 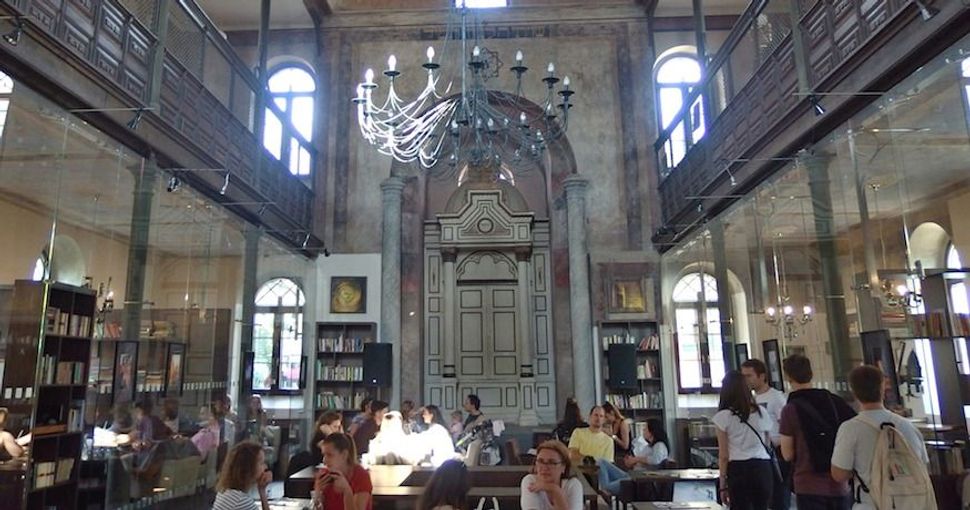 TRNAVA, Slovakia (JTA) — Growing up, Robert Sajtlava remembers playing near what used to be his native city’s Orthodox Synagogue.

A rectangular structure with a deceptively unimpressive facade, its ornate ceiling and interior walls suffered extensive damage from the precipitation leaking through the roof and, occasionally, by trespassers who came through the rickety fence.

“It was a ruin,” said Sajtlava, a 28-year-old catering professional, who is not Jewish.

Since 2016, however, Sajtlava comes to that building every day as the manager of Synagoga Cafe — a chic establishment that a local contractor opened that year inside the space of the former synagogue. The launch followed a complicated and costly renovation project that retained and preserved much of what remained of the 187-year-old structure.

In a recent and controversial development in Eastern Europe, former Jewish houses of worship left abandoned after the Holocaust are being renovated for commercial ends by contractors who capitalize on their Jewish history and incorporate it into a brand.

Critics view the businesses as exploitative cultural appropriation in the wake of a tragedy. Advocates argue it reflects respect and nostalgia for Jews in addition to providing a vehicle for at least some preservation of heritage sites.

The trend is especially visible over the past decade with the commercialization of several former synagogues and houses of worship. In 2013, Krakow’s Chewra Thilim was turned into a nightclub and, in 2016, into the Hevre bar, whose interior design highlights its Jewish past.

When Synagogues Get Second Lives — As Nightclubs