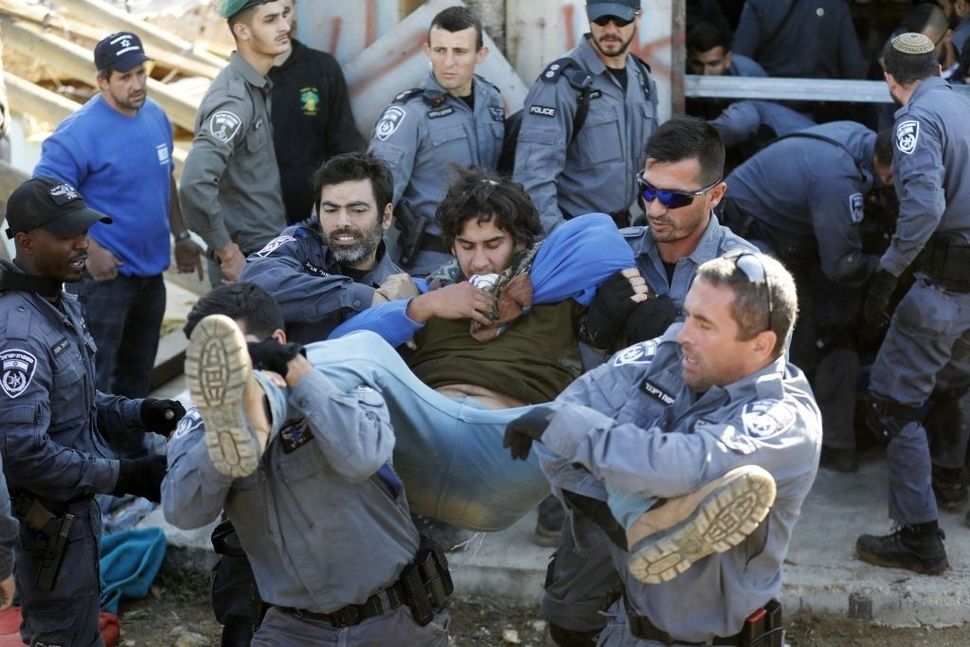 Israeli policemen evacuate Jewish settlers who barricaded themselves inside an illegally-built structure on private Palestinian land to prevent its demolition, in Elazar in the West Bank, on November 29 2017. Image by MENAHEM KAHANA/AFP/Getty Images

JERUSALEM (JTA) — At least 11 police officers were injured and six Jewish teens arrested during the clearing of a West Bank outpost.

The evacuation of the Tapuach West outpost began on Saturday night and continued into Sunday.

The Supreme Court had ordered the evacuation of the ten mobile homes located on privately owned land. Three of the ten units were inhabited by families, who were allowed to pack up and leave quietly on Saturday night. The other seven units were used for agricultural purposes, according to reports. Seven additional units at the outpost were moved to state-owned land.

A few dozen radical youths who sat at the outpost to protect it from demolition, reportedly attacked the officers sent to evacuate the outpost with rocks, liquid, bleach, sticks, eggs and other objects.

The evacuation comes days after the evacuation 15 permanent homes in the Netiv Haavot outpost, located in the Etzion bloc.