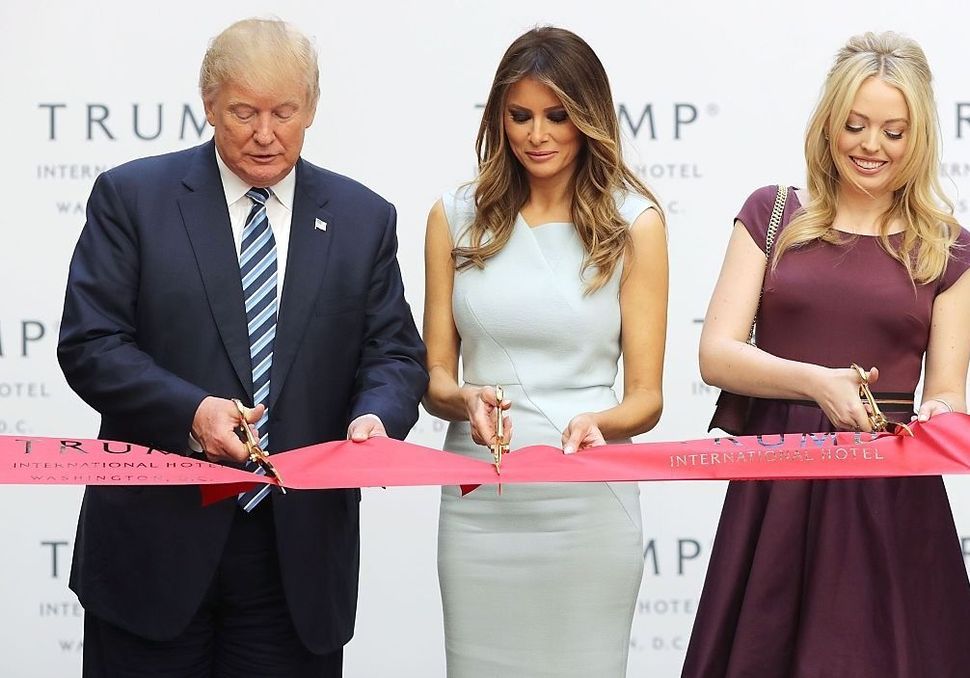 Republican presidential nominee Donald Trump, his wife Melania Trump and daughter Tiffany Trump cut the ribbon at the new Trump International Hotel October 26, 2016 in Washington, DC. The hotel, built inside the historic Old Post Office, has 263 luxury rooms, including the 6,300-square-foot ‘Trump Townhouse’ at $100,000 a night, with a five-night minimum. Image by Chip Somodevilla/Getty Images

Two Washington, D.C. rabbis have filed a complaint claiming that the local government should revoke the liquor license of the Trump International Hotel because President Trump is not a person of “good character,” which the law requires.

The complaint, which was filed to the district’s Alcoholic Beverage Control Board last month, claims that Trump fails the “good character” test because he has “a long history of telling lies,” has been accused of sexual assault by multiple women, has repeatedly “engaged in racism,” and has repeatedly broken the law and been known to associate with criminals.

It also argues that Trump is the “true and actual owner” of the property because he failed to properly divest from his businesses upon assuming office in January 2017.

The petition was filed by two retired judges and five local clergy members, including Rabbi Aaron Potek of the young adult outreach group Gather DC and Rabbi Jack Moline, the president of the Interfaith Alliance who formerly ran the National Jewish Democratic Council.

Local attorneys who specialize in liquor licensing told Washingtonian magazine that they were not aware of a case when the clause was invoked solely based on the owner’s character. The clause is usually invoked when an operator has a history of violations specific to the industry, like serving alcohol to minors or failing to quell violence in their facilities.

A Trump Organization spokesperson told The Washington Post that the complaint was “patently frivolous and an obvious attempt to harass and to distort the law for political gain.” But the chair of the Alcoholic Beverage Control Board said on Friday that the case is currently pending.

The hotel, which is only blocks from the White House, has frequently been the subject of ethics complaints due to its popularity with foreign dignitaries and American conservative political activists and advocates.