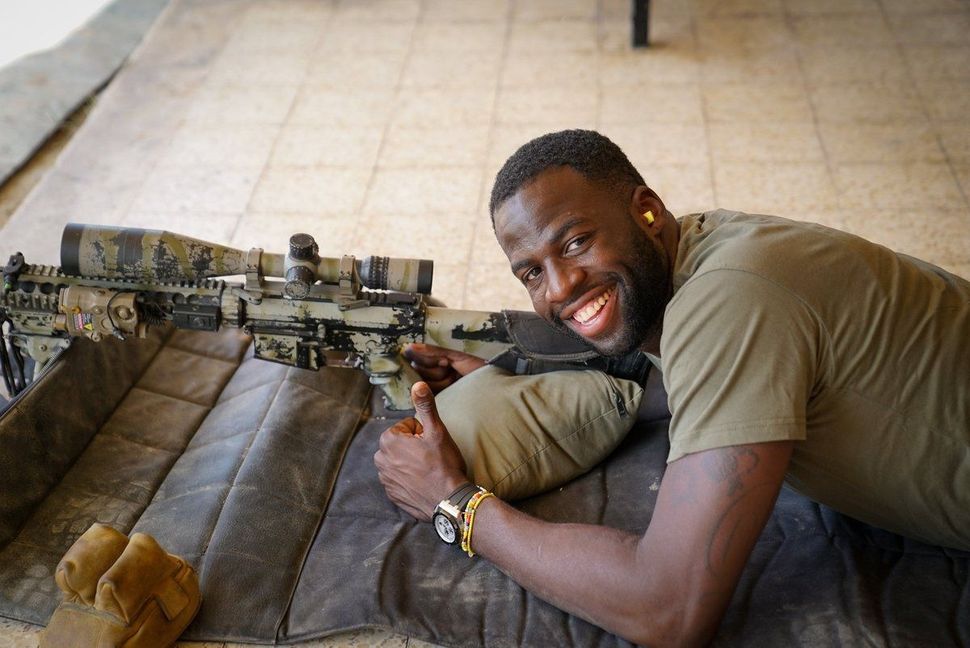 “It’s not every day that I meet an all-star,” Rivlin joked at the time. He called watching Green play “a true pleasure” and hoped it was “only be the first of many visits” for Green.

The Golden State Warriors star was also seen grinning at a border police training center, behind a large rifle.

Draymond Green(@Money23Green) was a guest today of the Israeli SWAT Dep. pic.twitter.com/ze9Ubztv22

Unsurprisingly, this part of Green’s trip — which was sponsored by the Friends of the IDF — prompted criticism from left-wing groups and activists.

“You got played,” wrote Shaun King, a prominent Black Lives Matter activist. “Flashing a toothy grin w/ a sniper rifle in Israel on a trip sponsored by Friends of the IDF is so horribly offensive. They’ve recently slaughtered 100s of unarmed Palestinians w/ those rifles.”

“Why go on a trip organized by Friends of the IDF? Why reject Donald Trump and accept the invitation of Rivlin? Why visit ‘counterterrorism Border Police units’ so soon in the aftermath of the May massacre?” he wrote. “It is, frankly, shocking to see Draymond Green smiling and shooting guns in their (the border police’s) company. These counterterrorism border police units are part of a military that shot and killed more than 60 Palestinians who were protesting at the border in May, less than two months ago.”

According to The Jerusalem Post, FIDF’s Midwest Region executive director, Tamir Oppenheim, led Green around the country. The basketball star “learned about different firearms the [Counterterrorism Unit] force employs and played basketball at the [unit’s] sport center, which FIDF supporters in Michigan donated.”