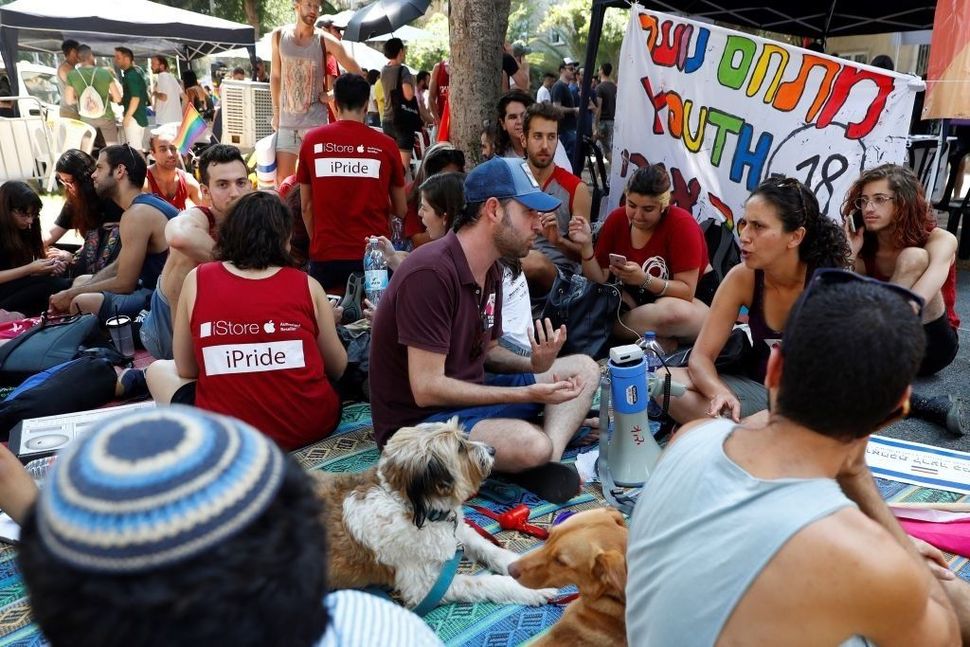 Israeli protesters attend a rally in Tel Aviv on July 22, 2018, to protest against a law on surrogacy parenthood that excludes gay men. Image by JACK GUEZ/AFP/Getty Images

JERUSALEM (JTA) — Protesters marched through Tel Aviv and blocked the main Ayalon highway as day-long demonstrations kicked off across the country to protest a new surrogacy law that does not include gay couples.

Thousands of marchers waving rainbow flags blocked the Ayalon in central Tel Aviv. At the same time, hundreds of protesters in support of the LGBT community launched a demonstration near the official prime minister’s residence in Jerusalem.

The day’s main protest is a rally scheduled for Rabin Square in Tel Aviv at 8:15 p.m.

The strike was announced shortly after the Knesset vote by the Aguda, the umbrella organization for the LGBT community in Israel.

The surrogacy law, which expands those eligible to hire surrogates in Israel to include single women, but excludes single men and gay couples, passed early Thursday morning in the Knesset by a vote of 59 to 52, part of a flood of votes before the lawmakers recessed at the end of the summer session.

Following the vote, the local divisions of several international companies, including Microsoft and Apple, announced they would support financially any employees who want to start a family though surrogacy.

Dozens of companies also offered a paid day off to employees who want to join the Sunday demonstrations. Many of those companies, and others throughout Israel, already were offering Sunday as an optional day off for employees in order to observe the solemn fast day of Tisha B’Av, marking the destruction of the Holy Temples in Jerusalem.