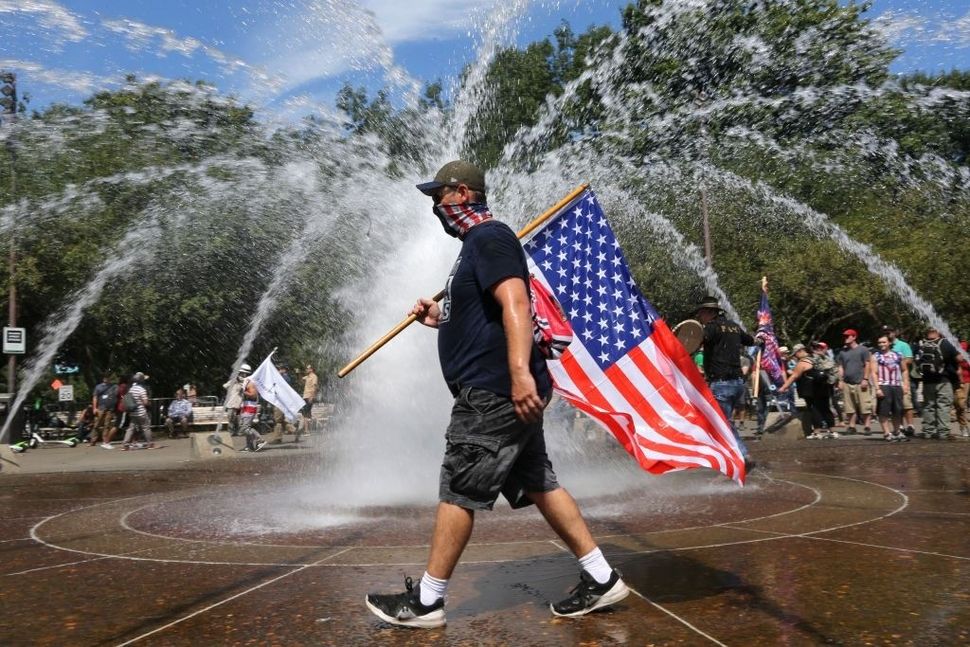 A right-wing demonstrator carries an American flag during rally on August 4, 2018 in Portland, Oregon. The rally was organized by the group Patriot Prayer, also attended by the affiliated group Proud Boys, which drew counter protesters and members of the anti-fascist group Antifa. Image by Karen Ducey/Getty Images

PORTLAND, Ore. (Reuters) – Scores of right-wing and anti-fascist demonstrators squared off on Saturday in Portland, Oregon, where four people were injured in similar rallies on June 30.

Police tried to keep the two sides apart as protesters chanted and hurled insults at each other. Authorities set up a security perimeter around a waterfront park and officers frisked attendees and confiscated flag poles and other potential weapons.

Clashes after similar protests in Portland in June sent four people including a police officer to the hospital.

Among the right-wing marchers, some of whom wore body armor and carried shields, were members of the Patriot Prayer group founded by Joey Gibson, a conservative Republican who is running for the U.S. Senate in November’s midterm elections.

They were opposed by counter-protesters, some dressed in black with face masks, who shouted anti-Nazi slogans.

Gibson told supporters they had to be united.

“It’s not even about those punks over there,” he said of the counter-protesters, in a video of his speech shared on social media. “They’re just an obstacle. We’ve got to get them out of the way so we can truly march the streets with thousands of people, so that we can actually come together with liberals.”

Using a Portland Police Bureau sound truck, an officer told people gathered in and around Tom McCall Waterfront Park that no firearms were allowed, and that officers would use reasonable force to curtail any “assaultive behavior.”

Protesters at one intersection were seen throwing projectiles including rocks and bottles, the officer said. He called on people there to disperse, adding that failure to do so could result in arrest, citation, or being the subject of “the use of riot control agents or impact weapons.”

Police said on Twitter that they had seized multiple items that could be used as weapons, and were “observing people in helmets and protective padding.”

Black-clad Robbie Abalos, a 28-year-old Portland activist and standup comic, said he has no tight affiliations but came out to support the anti-fascist protesters.

Abalos said he planned to try to talk right-wing demonstrators around to his point of view.

“I’m hoping reverse manifestation takes place and everybody that thinks this will be a violent horrible day will be let down,” Abalos said. “I can’t not show up. I think it’s important to make a stand.”