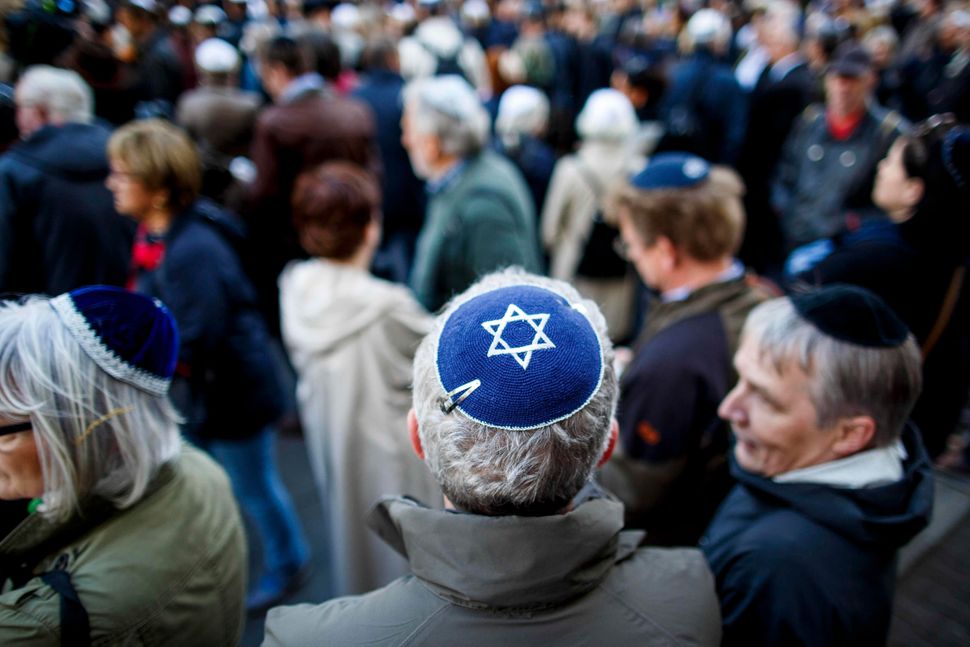 Participants wearing a kippah during a “wear a kippah” gathering to protest against anti-Semitism in front of the Jewish Community House on April 25, 2018 in Berlin, Germany. Image by Getty Images

(JTA) — The number of anti-Semitic crimes in Germany during the first half of 2018 increased 10 percent over the same period last year.

There were 401 anti-Semitic crimes in Germany from January through June, according to government data reported Wednesday by Politico. The vast majority, 87 percent, came from the far-right. One-fifth were committed in Berlin.

In July, a Jewish man was assaulted in a Berlin park by a group of young adults and teens after they noticed he was wearing a Star of David. Days earlier, a Syrian man, 19, was found guilty of an April attack against an Israeli man who was wearing a kippah on a Berlin street. Later that month, a Jewish professor visiting Germany was assaulted in a Bonn park — first by a Palestinian and then by police who slammed him to the ground and punched him repeatedly in the face, mistaking him for the attacker.

Amid those incidents, the German government increased state benefits for the Central Council of Jews in Germany for the first time since 2011, noting “the rise in anti-Semitism in our society.” Days later, 40 Jewish organizations in Germany signed an open letter calling on the government to confront anti-Semitism.