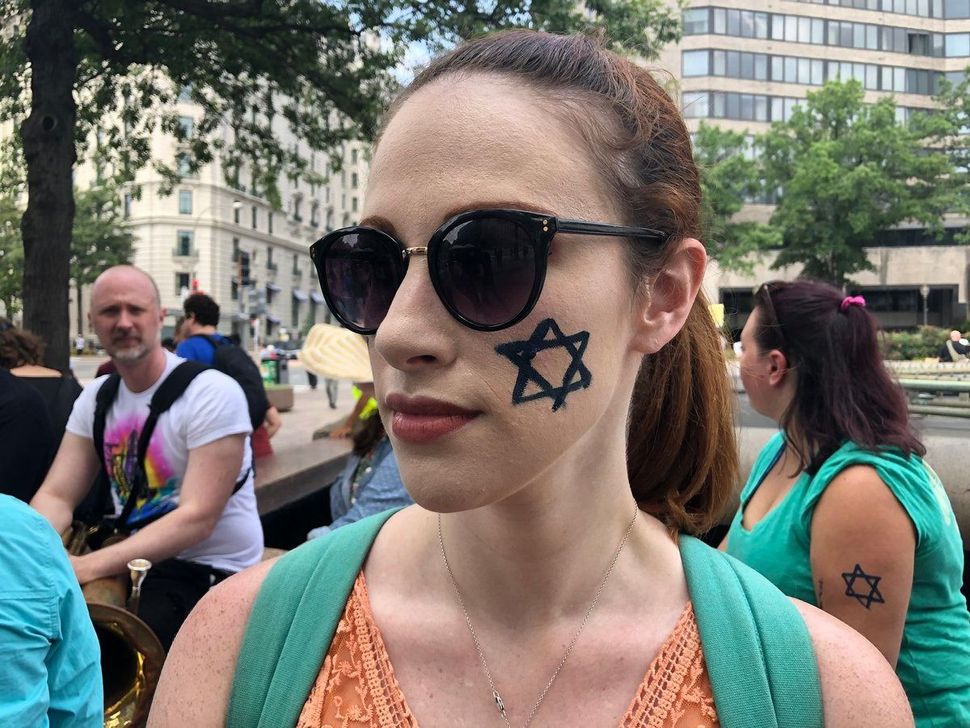 A counter-protester against the “Unite the Right 2” rally at Freedom Plaza in Washington, D.C. Image by Ben Fractenberg/Forward

Jews, both individually and as part of Jewish groups, have been heavily active in opposing the “Unite the Right 2” rally in Washington, D.C. on Sunday organized by the coordinator of last year’s deadly white supremacist march in Charlottesville, Virginia. Knowing that attendees of the march last year chanted “Jews will not replace us,” some counter-protesters on Sunday made explicit their Jewish identity – by drawing it on their faces.

“These people want me dead because I exist, And it’s not ok,” Becki, a D.C. resident who painted a black Star of David on her cheek, told the Forward. “I wanted to show them I’m not going anywhere.”

Others drew their stars on their arms or other body parts.

Note: Several protestors who identify as Jewish have drawn Stars of David on their faces.

When asked if they consider that a bold and defiant act today, they are humble and dismissive, saying it was far more dangerous in other periods of history.

“Fascism has not historically been good for Jews,” Jewish socialist Carsie Blanton told the Forward at Lafayette Park in front of the White House, a few hours before the white nationalists were expected there. “I think we need all methods [to fight fascists]. It’s an all hands on deck situation.”

Another counter-protest rally at Freedom Plaza featured speakers representing many different faith groups, including a self-described “black, queer, Jewish, Hebrew priestess.” One speaker there led the crowd in a chant of “From Palestine to Mexico, all the walls have got to go” and discussed the Boycott, Divestment and Sanctions campaign against Israel.

The next speaker identifies as Jewish, then asks Jews in the crowd to raise their hands to show their diversity. One group raises a sign reading “Jews are welcome here,” and the speaker notes the role many Jews played in early anti-racist movements in the U.S.