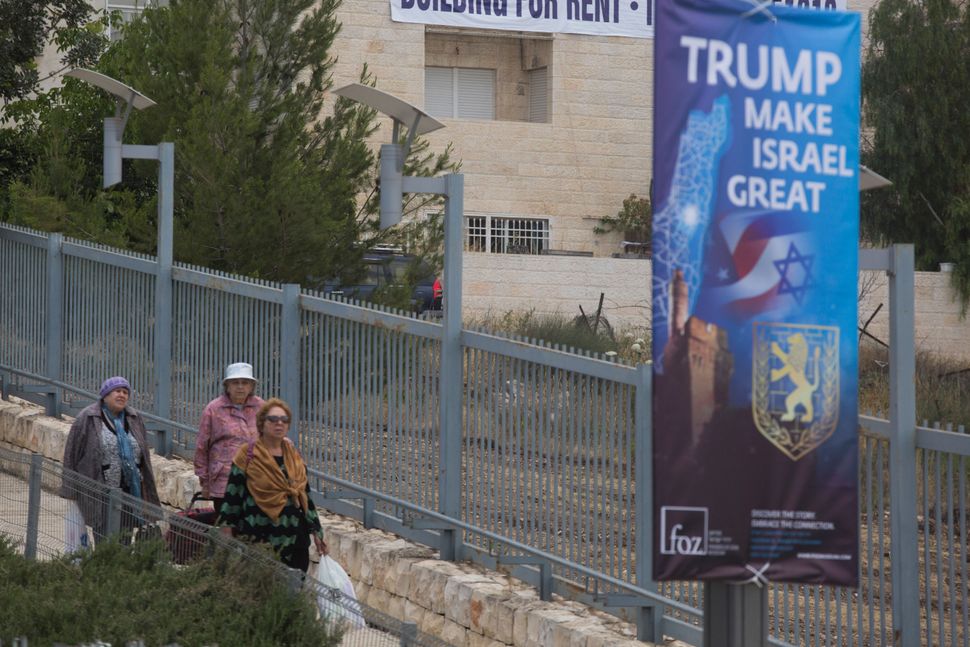 JERUSALEM (JTA) — President Trump said Israel will have to pay a “high price” in peace negotiations with the Palestinians over the move of the U.S. Embassy to Jerusalem, raising consternation in the Jewish state.

On Tuesday, addressing supporters at a rally in West Virginia, Trump praised himself for moving the U.S. Embassy to Jerusalem from Tel Aviv, saying it “should have been done years ago.” He said the decision would help facilitate a peace deal between Israel and the Palestinians because it took the issue of Jerusalem “off the table.”

“And you know what, in the negotiation Israel will have to pay a higher price because they won a very big thing, but I took it off the table,” he said. The Palestinians “could never get past the fact of Jerusalem becoming the capital, but they will get something very good next because it’s their turn next.”

National Security Adviser John Bolton denied Wednesday that that the embassy move was part of a “quid pro quo.” However, he added that “the fundamental point is that ultimately this is something that the parties are going to have to agree on.”

Responding to Trump, Israeli Agriculture Minister Uri Ariel told Army Radio that “this isn’t a terrible morning, but there is cause for concern regarding Trump.” Regional Cooperation Minister Tzachi Hanegbi took pains to reassure Israelis, asserting that the U.S. leader “has not turned on us.”

Hamas stated that Trump’s “declarations, according to which Jerusalem is off the negotiation table, are audacious and dangerous and the right response would be to cancel the Palestinian Authority’s recognition of the State of Israel, and cease all security coordination with Israel. The authority should also break all contacts, including security contacts, with the American administration.”

Speaking with The Times of Israel, Majdi al-Khaldi, a senior adviser to Palestinian Authority President Mahmoud Abbas, said that “the American administration made a major mistake when it recognized Jerusalem as Israel’s capital and moved its embassy there.”