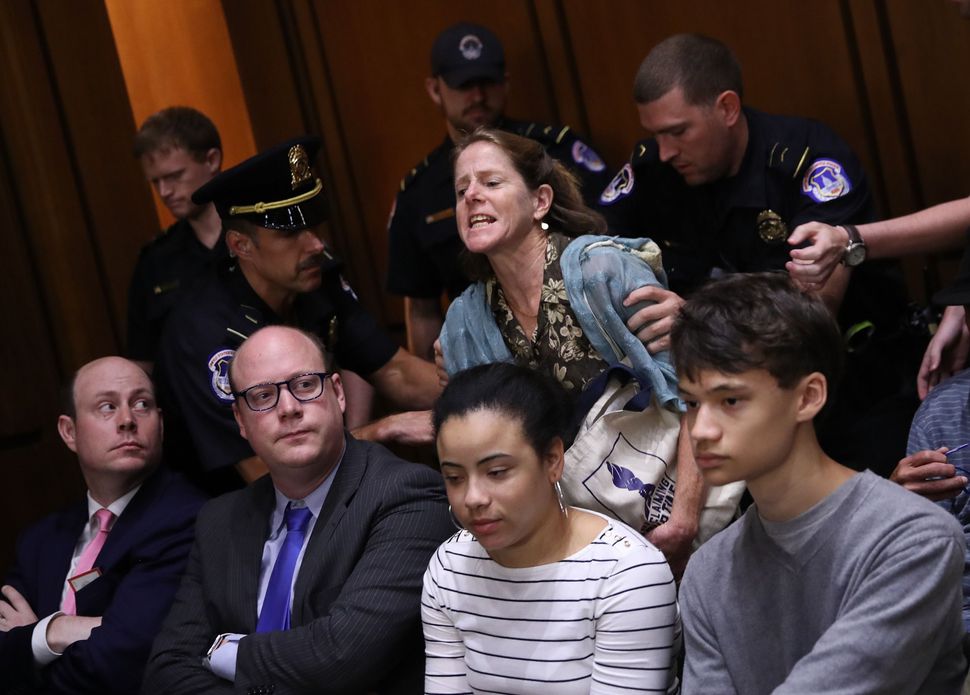 Rabbi Barat Ellman was wearing her kippah and tallit when she stood up in the middle of a packed room during Judge Brett Kavanaugh’s Supreme Court nomination hearing Wednesday morning and shouted, “It’s a shonda!”

Guards immediately grabbed the 59-year-old Brooklyn teacher and activist and forcibly removed her from the Senate hearing. Ellman was one of dozens of activists who risked arrest to protest what they described as the ramming through of a conservative justice to the national’s highest court.

The rabbi told the Forward it was “kind of scary” to stand up speak during the testimony, but she felt compelled by her faith to act.

“I was thinking about this in terms of being a rabbi, being a Jew, being someone about to celebrate the high holidays,” Ellman said while heading back to New York Wednesday evening. “I said it’s on me to do what I can for righteousness. And so I have to be there.”

Ellman was charged with disorderly conduct after being removed. And then she got right back in line and again entered the Hart Senate Office.

“We wanted to make it clear that this is something that is illegitimate by continuing our protest,” Ellman said.

She once again stood up and shouted at Kavanaugh, demanding that he clearly state if he thought a sitting president could be subpoenaed to testify.

“It’s going to be put before you when you’re on the Supreme Court,” Ellman yelled as she was escorted out a second time.

Women will continue to exercise and defend our constitutionally protected rights, no matter how much the president rails against us. @CPDAction @BaratEllman @truahrabbis @JFREJNYC pic.twitter.com/hEI9mv9YgY

She was again charged with disorderly conduct.

Elman, who teaches at Fordham University and is active with Jews for Racial and Economic Justice, was released in time to make her Amtrak train headed back to New York.

As she rode back and had some time to process the days events she again came back to the same word.

“It’s a shonda what they’re presenting as documentation [on Kavanaugh’s record],” Elmman said. “From the perspective of our Jewish conviction that justice should be a guiding principle, the process is failing that so egregiously.”