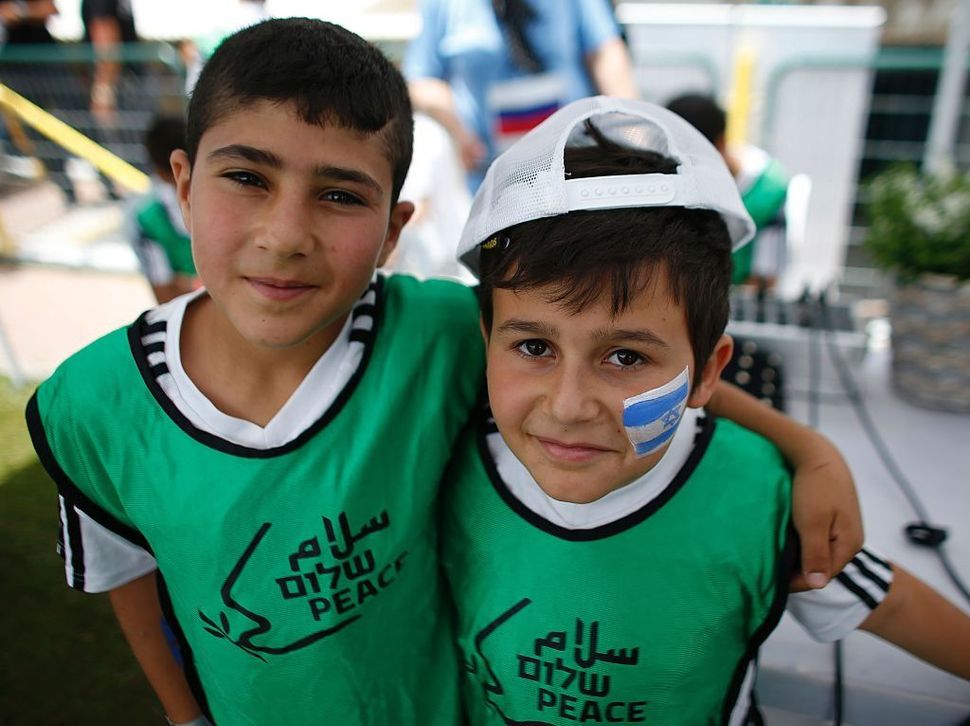 Mohammad Shehade, (L) a Palestinian boy from the West Bank town of Azariya, embraces Hofi Cohen, an Israeli boy from the Israeli town of Sderot, as they pose for a picture during the opening of the ‘Mini World Cup for Peace’ football event in Herzliya. Image by AHMAD GHARABLI/AFP/Getty Images

(JTA) — The United States has cut $10 million of foreign aid money that was supporting coexistence programs between Israelis and Palestinians.

The cuts were first reported Friday in the New York Times.

It is believed to have been the last remaining U.S. aid for Palestinian civilians.

In recent weeks, the Trump administration has frozen $25 million in funding to Palestinian hospitals in eastern Jerusalem, halted all funding to the UNRWA, United Nations refugee agency that aids Palestinians and  cut more than $200 million for humanitarian and development aid in the West Bank and Gaza.

The portion of the money involving Palestinians in the West Bank and Gaza Strip was being redirected to programs between Jewish and Arab Israelis, a U.S. embassy official told the AFP news agency.

In a statement on Friday, the United States Agency for International Development, or U.S.A.I.D., said it is “currently unable to engage Palestinians in the West Bank and Gaza as a result of the administration’s recent decision on Palestinian assistance.” The agency said it was “continuing its support for civil society working on these issues within Israel.”

The money already had been budgeted by Congress for allocation in fiscal year 2017, which ends on September 30.

He wrote in a tweet: “Having run Seeds of Peace for several years, what Trump Administration is doing to Israelis and Palestinians is cruel, stupid, and counterproductive. It’s precisely because there is no peace process that you need these P2P programs.” P2P stands for people to people programs.

President Trump earlier this year requested a review of all U.S. aid to the Palestinians, threatening to cut off aid unless the Palestinian Authority agreed to enter into serious peace negotiations with Israel.

The Palestinian Authority has angered Trump by refusing to work with his administration in developing a peace plan. The Palestinians walked away from the talks in December after Trump recognized Jerusalem as Israel’s capital.