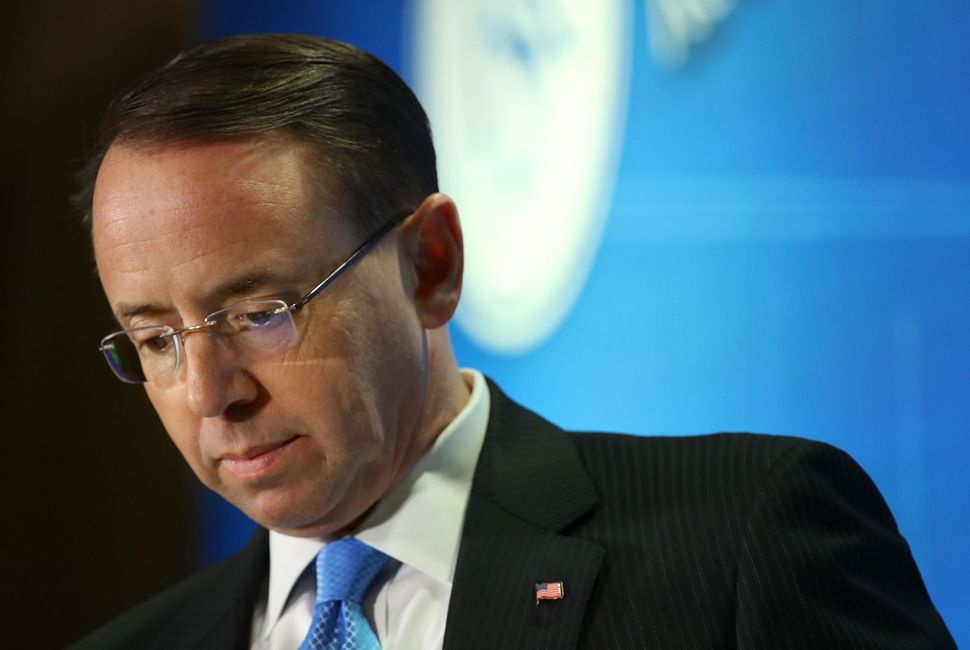 Rosenstein in May of 2017 also discussed secretly recording the president, apparently to make the case against Trump, The Times said, according to anonymous sources familiar with the events or apprised of notes written at the time by Andrew McCabe, then the acting FBI director.

Rosenstein categorically denied the allegations. “The New York Times’s story is inaccurate and factually incorrect,” he told the newspaper in a statement. “I will not further comment on a story based on anonymous sources who are obviously biased against the department and are advancing their own personal agenda. But let me be clear about this: Based on my personal dealings with the president, there is no basis to invoke the 25th Amendment.”

The 25th Amendment is the mechanism by which a majority of the Cabinet may remove an unfit president from office.

The Times said Rosenstein was alarmed by Trump’s lack of seriousness in his search for a new FBI director after Trump had fired James Comey. He was also angry that Trump had cited a memo Rosenstein had written criticizing Comey’s handling in 2016 of an investigation into Hillary Clinton, Trump’s Democratic rival in the presidential election, as a pretext for firing Comey.

Trump later acknowledged that he fired Comey because the FBI was conducting an investigation into allegations of collusion between the Trump campaign and Russia. The gambit failed: The attorney-general, Jeff Sessions, who was involved in the campaign, recused himself from the matter, and Rosenstein, in Sessions’ stead, named a special prosecutor to look into the matter, Robert Mueller.

Mueller’s investigation has expanded and he has obtained multiple indictments, guilty pleas and a conviction. Trump has attacked Mueller, Sessions and, at times, Rosenstein, and he calls the investigation a “witch hunt.” McCabe, who also was repeatedly targeted by Clinton, was fired earlier this year as deputy FBI director for alleged dishonesty related to communications with media about the Clinton investigation. He disputes the charge.