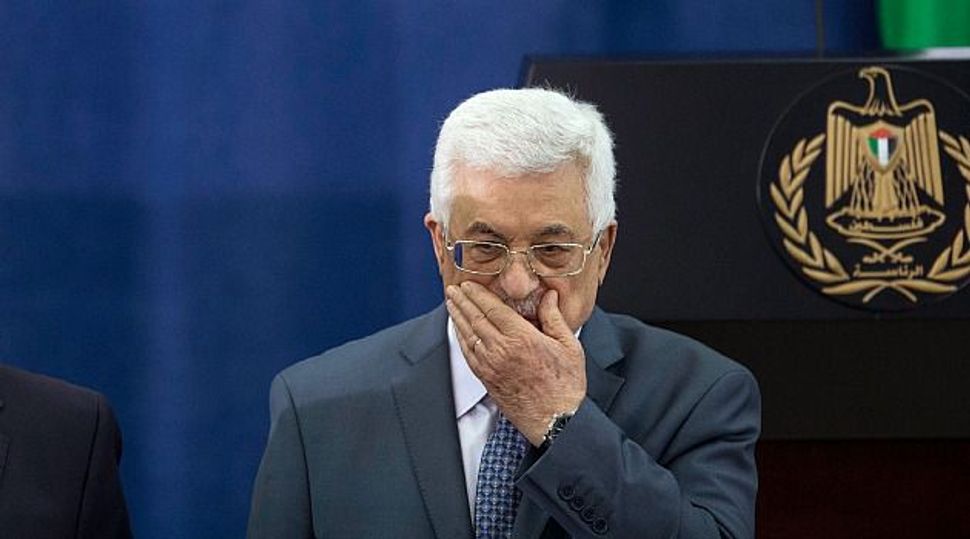 (JTA) — Palestinian Authority President Mahmoud Abbas in an address to the United Nations rejected criticism of the P.A. for paying monthly salaries to Palestinians who kill Israelis or the families of the killers.

“I pay tribute to our hero martyrs and prisoners of war,” he told the General Assembly on Thursday.

Abbas, who was introduced as head of the “State of Palestine,” said the law will lead to “one racist state, an apartheid state,” and reminded the General Assembly that it had sanctioned South Africa for its policies of apartheid. He accused Israel of “legalizing discrimination against the Arabs of Israel and called on the United Nations to act to reject it and cancel it.”

At the beginning of his speech, he announced that “Jerusalem is not for sale. And the Palestinian people’s rights are not up for bargaining.”

Abbas said the Palestinians have participated in all peace initiatives and accepted every invitation to sit at the peace table with Israel.

“I reiterate that we are not against negotiations and have never rejected negotiations on any day, and that we continue to extend our hands for peace,” he said. “We only believe in peace. Peace is the only path. We don’t believe in terrorism and violence.”

Abbas accused Trump of sullying the peace process and of being “too biased for Israel” to be an honest broker.

“We welcomed Trump when he was elected and praised his announcement of peace plan, but were shocked by his actions concerning the process,” he said.